The FIR against ex-IAS officer Surya Pratap Singh says the tweet has wrong facts and misinformation, and has led to an atmosphere of fear among the public at large. 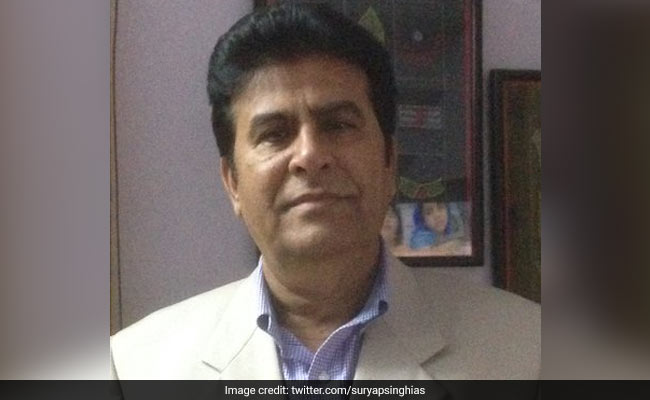 A case has been filed against a retired IAS officer in Uttar Pradesh by the police for a tweet on Wednesday, in which he raised questions about the state government's testing policy related to the coronavirus pandemic and alleged that a top Uttar Pradesh government official was asking field officials in districts to go slow on testing samples.

Mr Singh had tweeted in Hindi: "After Chief Minister Yogi's Team-11 meeting, the Chief Secretary scolded those district magistrates who were carrying out a large number of Corona tests saying, 'Why have you picked up such pace, are you going to get a prize that you are shouting test,test?'. @ChiefSecyUP please clarify? Is no test = no corona Uttar Pradesh's strategy?"

The FIR says the tweet has wrong facts and misinformation, and has led to an atmosphere of fear among the public at large. Mr Singh has been charged with disobeying rules, intent to incite and other sections of the law on epidemics control.

Surya Pratap Singh is a 1982 batch IAS officer who retired in 2015. His last posting was as a Principal Secretary to the Uttar Pradesh government but the retired officer was known more for his outspoken nature, even while he was in service. Six months before he retired in 2015, the officer had sought voluntary retirement, saying, "It was impossible for an honest officer to work in Uttar Pradesh."

Samajwadi Party chief Akhilesh Yadav was the Chief Minister of the state at the time. Before his voluntary retirement application, Mr Singh had been in the news for criticising the then Uttar Pradesh government on various platforms, including on social media.

The retired officer has reacted to the FIR against him, tweeting in Hindi, "Chief Minister Yogi Adityanath-ji, if you are angry with me for raising the issue of irregularities in the primary school teacher recruitment process, you do not need to make a random tweet the basis for extracting revenge. You can file a direct case against me after strangling 'freedom of expression'."