Captain Vikram Batra died fighting Pakistani forces during the Kargil war in 1999 at the age of 24. 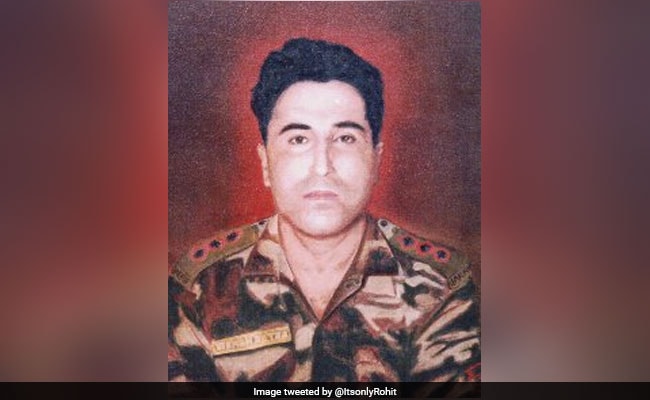 Kargil war hero Captain Vikram Batra's father recalled his son's bravery and patriotism and says his feat has elevated their status to that of proud parents of a Param Vir Chakra recipient.

"Though we miss him every moment, we feel that he is always with us spiritually. The departure of a noble son is of course painful, but to bring forth such a son is also great luck. We will always be proud of him," said GL Batra.

Captain Vikram died fighting Pakistani forces during the Kargil war in 1999 at the age of 24. He was given the highest wartime gallantry award Param Vir Chakra posthumously.

"We had never imagined that a son could make his parents worthy of the amount of honour we received from people across our country in the last 20 years after his martyrdom. He has elevated our status to that of proud parents of a Param Vir Chakra recipient," his father said.

Due to his exemplary feat, Captain Vikram was awarded with many titles. He came to be fondly called the 'Tiger of Drass', the 'Lion of Kargil', the 'Kargil Hero', and so on. His bravery, zeal and determination had set a standard for everyone fighting the war.

Captain Vikram's most difficult mission was the capture of crucial peak - Point 4875, but even after that the enemy continued to fire from a position north of the point. Reinforcements were immediately brought up.

Despite having high fever and fatigue, Captain Vikram volunteered to head a party to the battlefront. Motivated by his offer, many soldiers volunteered to accompany him, his father recalled.

"Vikram and the soldiers began their arduous trek. From eyewitnesses, I heard later that, while still at the task, somewhere along the climb, suddenly Vikram's face changed. The signs of fatigue and fever vanished. He became a man fired by a mission," Mr Batra writes in the foreword of a revised edition of Mr Harinder Baweja's book "A Soldier's Diary: Kargil, The Inside Story".

On 7 July, the mission was almost over, when Captain Vikram ran out of his bunker to rescue another officer, Lt Naveen Anaberu, whose legs had been severely injured in an explosion.

"As Vikram was dragging Naveen towards cover, the gravely wounded officer pleaded with Vikram to let him continue the fight. Just then a bullet pierced through Vikram's chest. Vikram was martyred, but he managed to save the life of Lt Naveen," writes his father in the book.

"Enraged by Vikram's death, the soldiers of the 13 JAK Rifles pursued the enemy. Unnerved by the fury of the attack, the Pakistanis fell back. The Indian soldiers gained the upper hand. Captain Batra's sacrifice paved the way for the success of our troops and the consolidation of the Indian hold on Point 4875," he said.

Mr Batra says that when one of Captain Vikram's friends had told him to be careful since war had begun, he had replied, "Don't worry. I will either come back after raising the Indian flag in victory or return wrapped in it."

Mr Batra then goes on to describe his and his wife's visit to Drass in Kargil in 2002.

"The feeling of pride, as if we were visiting our beloved son as a commanding officer, was spiraling through our veins," he said.

"The journey would not have been complete without touching the soil where Vikram laid down his life. It was an overwhelming gesture when the corps commander gifted us with two glasses filled with the soil of Point 4875 and Tololing. For us, it was nothing less than visiting a pilgrimage site," Mr Batra wrote.