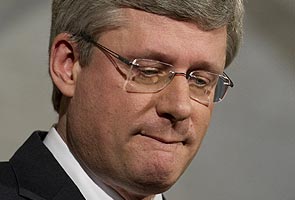 Mr Harper had visited Amritsar in 2009 and offered prayers at the Golden Temple.

Tight security arrangements are in place for Mr Harper's visit at Chandigarh and Anandpur Sahib in Punjab, official spokesman said in Chandigarh on Tuesday.

He is expected to arrive in Chandigarh on Wednesday afternoon and will visit Takht Keshgarh Sahib, the second most important Sikh shrine after Golden Temple, the same day and offer prayers.

Mr Harper, who will be accompanied by his wife, two ministers of Indian-origin - Bal Gosal (Sports Minister) and Tim Uppal (Democratic Reforms Minister) - and other dignitaries, is likely to hold talks with Punjab Governor Shivraj Patil at Raj Bhawan, sources said.

He will leave for Bangalore the next day.

Meanwhile, the Canadian consulate in Chandigarh described the proposed visit of the Prime Minister as "private."