Calls For Ram Temple In Ayodhya Reverberate At Kumbh Mela

The massive Kumbh Mela in Prayagraj, formerly Allahabad, is turning into an echo chamber for powerful Hindu groups to push for a Ram temple in Ayodhya. The Vishwa Hindu Parishad is organising a two-day meeting, starting this noon, to discuss how they can work for early construction of the temple at the disputed site in the Uttar Pradesh town. In a separate event, an influential Hindu seer announced that saints will march to Ayodhya and lay the foundation stone for the temple on February 21.

This is not the first time the VHP is organising a large gathering to discuss their way forward for the temple, but that they are meeting at the Kumbh Mela with the temple as their focus is seen as significant.

A replica of the proposed Ram temple installed outside the Kumbh Mela venue has become a major attraction with people posing for selfies in front of the structure.

Uttar Pradesh Chief Minister Yogi Adityanath, who took a dip in the Sangam on Tuesday, is likely to meet Mohan Bhagwat in Prayagraj today at the Kumbh Mela.

Swaroopanand Saraswati, the head of the Dwarka Sharda Peeth who called the march to Ayodhya on February 21, said they are not violating the Supreme Court's order. "Until the high court's order is cancelled by the Supreme Court, it is still applicable.  Lord Ram lives there and that's his birthplace," he told reporters, referring to an order by the Allahabad High Court that is on hold in the top court. 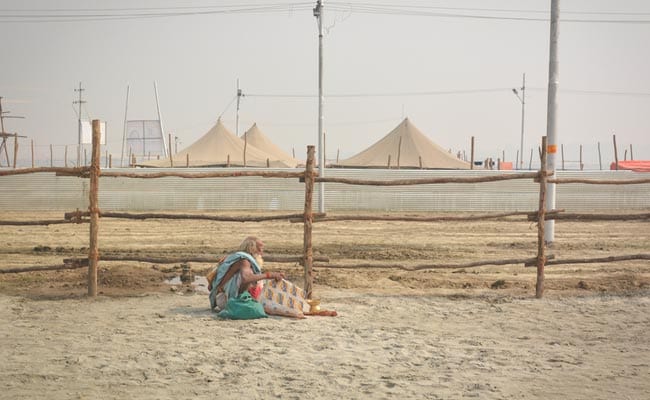 The government led by Prime Minister Narendra Modi has said any legislative route to build the temple is possible only after the court case on the title suit is settled.

On Tuesday, the centre asked the Supreme Court that surplus land acquired by the government in 1993 around the disputed site, where the Babri mosque stood, may be returned to the original owners.

A large part of this surplus land is claimed by the Ram Janmabhoomi Nyas or the trust overseeing the Ram temple plan.

On Wednesday, BJP chief Amit Shah during an event in Kanpur made it clear that the Ram temple would be a major campaign issue for the party ahead of the Lok Sabha elections due by May.

"The 42 acres at Ram Janmabhoomi was taken by the Congress government. But we are committed. The Ram Janmabhoomi trust has asked for land and we immediately went to the Supreme Court. I believe this is a historical step," Mr Shah said. "We hope this case will be disposed of soon and there is a grand temple in Ayodhya," Mr Shah told party workers in Kanpur.

A mob of Hindu activists levelled the Babri Masjid in 1992, sparking communal riots that killed about 2,000 people across India. Hindu groups believe the site is the birthplace of Lord Ram. They also point to evidence there was a temple there before the mosque was built in 1528.