In 1994, KJ Alphons had featured in Time magazine's list of 100 Young Global Leaders. During his stint in Delhi, he was known for his strong drive to remove encroachments 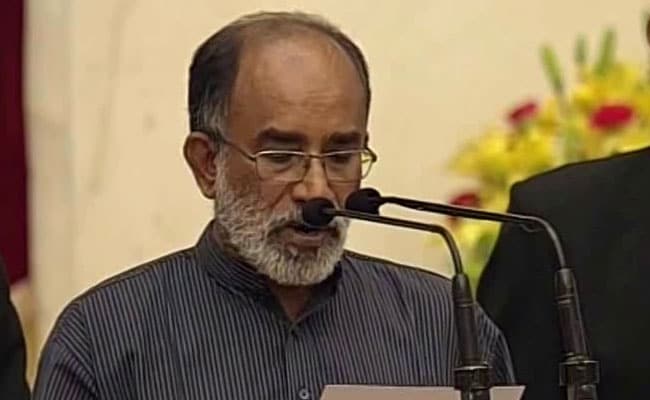 "It is great news. I was not expecting this. It is a great surprise," Mr Alphons told reporters this morning on his way to a meeting with the Prime Minister.

A retired IAS officer of the 1979 batch, Mr Alphons had entered politics with the help of the CPM during his first election in Kerala. He won the assembly elections in 2006 as an independent, backed by the Left, from a Christian-dominated constituency. Though he was offered a second chance by the Left in the next assembly polls, he turned down the offer saying that he wanted to shift his activities to the national level. Known for his strong anti-corruption stance, in 2011 he joined the saffron party and went on to become the member of the national executive.

His induction in the ministry is expected to ensure representation from Kerala -- one of the seven non-BJP states that Amit Shah has identified as poll target and where the party's ideological mentor, the Rashtriya Swayamsevak Sangh, has a strong presence.

PM Modi appointed Mr Alphons, a practicing advocate, last year as the administrator of Chandigarh. But the order had to be withdrawn after protests from Akali Dal, which ruled the state at the time in alliance with the BJP.

In 1994, Mr Alphons had featured in Time magazine's list of 100 Young Global Leaders. During his stint in Delhi, as the Delhi Development Authority's land commissioner, he was known as the "demolition man" for his strong drive to remove encroachments.

Promoted
Listen to the latest songs, only on JioSaavn.com
Born in a non-electrified Manimala village in Kottayam district to a World War II veteran, he pioneered the literacy movement in India as district collector of Kottayam by making it the first 100 per cent literate town in India in 1989.

BJP state president Kummanom Rajasekharan termed his induction into the cabinet as an 'Onam gift' of the NDA government, while the state is all set to celebrate its harvest festival tomorrow.

Indrani Mukerjea Was Asked If She Thinks Daughter Is Alive. Her Reply