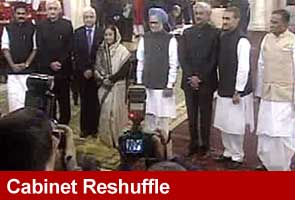 New Delhi: Here are the major changes in the Union Cabinet after the reshuffle: