The land in Nindar village, around 20 km from Jaipur, is part of the 333 hectares the Rajasthan government had earmarked in 2010 for a housing project. The farmers are protesting against the rate of compensation the government is offering. 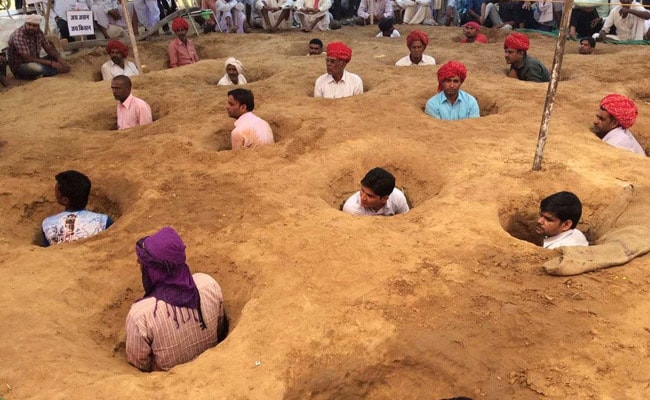 More than 50 farmers in Rajasthan have been taking it in turns to sit in pits as part of protest.

Jaipur: For three days, more than 50 farmers have been digging pits and spending hours buried neck-deep in mud in a protest near Rajasthan's Jaipur. They say the state government has forcibly acquired their land at very poor rates.

The government started acquiring land in Nindar village, around 20 km from Jaipur, in 2010 for a housing project. But the farmers say the compensation is hardly enough, given the market rates have spiraled in seven years.

The farmers also want a fresh survey of the land the government has marked for acquisition. They say much of it is now occupied by housing societies and people will be left homeless if it is acquired. Some of the residents of these housing societies are also supporting the protests.

Rallies and demonstrations started 17 days ago, but no one noticed and no government representative came.  Last week, the farmers decided to step up the protests with a "zameen samadhi satyagrah" (burial satyagraha) launched on October 2, Mahatma Gandhi's birth anniversary. Under it, around 54 people take it in turns to sit in the pits, four of which are for women.

One of the protesters, 90-year-old Nanthi Bai, said her family has lived here for seven generations.

Promoted
Listen to the latest songs, only on JioSaavn.com
"I have brought up my eight sons here in this land and I have 20 grandchildren...  if you take me away from my land where will I go? I don't want the money I want my land," she said, breaking down.

The government has called the protesting farmers for talks and has agreed to look into their demands -- especially the one for another survey of the area, which will look at not demolishing houses on the acquired land. "We have given them compensation and are giving them developed land in the same area. We hope the issue is resolved soon after talks... we have farmers best interests at heart," said minister Rajendra Rathore.