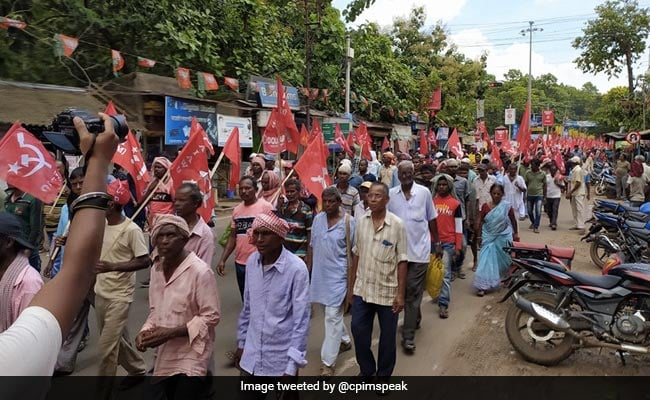 Chaos reigned supreme in West Bengal's Burdwan city on Wednesday as members of the CPI(M) clashed with the police when their rally was stopped near the Curzon Gate.

Protesting against corruption in the state government, two rallies of the CPI(M) -- one coming from Burdwan station and another from Nilpur, converged at the Curzon Gate area in the heart of the city.

When the CPI(M) supporters tried to go toward the district magistrate's office, they were stopped by the police, leading to the clash.

Besides, several police vehicles and public property, including a 'Biswa Bangla' sculpture, were vandalised, he said.

The office of TMC's Bardhaman Dakshin MLA Khokan Das was also vandalised. Pieces of stones and bricks could be seen over a 1 km area as remnants of the violence.

Failing to control the situation even after a round of baton-charge, police had to use tear gas shells and water cannons.

Police said they have lodged a case and detained 140 CPI(M) supporters, including the party's central committee member Abhas Roy Chowdhury.

CPI(M) state secretary Md Salim who led the rally claimed that the police did not adhere to protocols and tear gas shells were charged at the protesters without warning.

He claimed that the police action on the protesters was unprovoked, denying that supporters of his party hurled stones at the police.

TMC spokesperson Debu Tudu said the CPI(M) was trying to create unrest in the state once again and his party will take on this politically.