PM Modi also asserted that the 'dhamma chakra' on the tricolour is a driving force for the country. 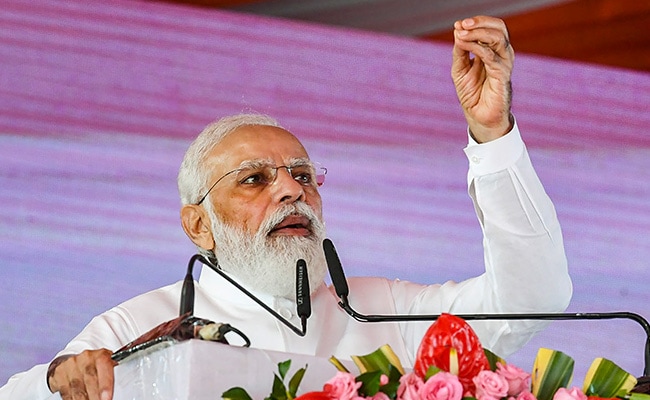 Describing Lord Buddha as the inspiration for India's Constitution even today, Prime Minister Narendra Modi on Wednesday said Buddha resides in the soul of humanity and connects different cultures and countries.

India has made this aspect of his teachings part of the journey of its growth, the prime minister said while contemporising the message of the Buddha and linking it to issues such as climate change and a self-reliant India.

Addressing a gathering at the Abhidhamma Day programme after inaugurating a new international airport here, PM Modi also asserted that the 'dhamma chakra' on the tricolour is a driving force for the country.

The day symbolises the end of the three-month rainy retreat 'varshavaas' or 'vassa' during which Buddhist monks stay in a monastery to pray and meditate.

"Even today, when someone enters Parliament, they see the mantra 'Dharma Chakra Pravartaanye'," the prime minister said.

"India never believed in restricting the knowledge, great messages or the thoughts of great souls. Whatever was ours was shared with entire humanity. That is why, human values like non-violence and compassion settled in the heart of India so naturally," PM Modi said.

Buddha, he said, is global because he talks about starting from within. "Lord Buddha's Buddhatatva is the sense of ultimate responsibility," he added.

The programme was organised by the Union Culture Ministry in collaboration with the International Buddhist Confederation and the Uttar Pradesh government.

"Today, when the world talks about climate conservation and expresses concern over climate change, then many questions come up. But if we adopt the message of Buddha, then the path of what has to be done, instead of who has to do it, will be visible," PM Modi said.

Kushinagar, about 320 km from the state capital Lucknow, is the final resting place of the Buddha. This is where he attained Mahaparinirvana after his death.

The inauguration of the Kushinagar International Airport was marked by the landing of a flight from the Sri Lankan capital Colombo bringing a Sri Lankan delegation of over 100 Buddhist monks and dignitaries.

Lord Buddha, PM Modi told the gathering, had said 'Ap Deepo Bhava', which means become your lamp on your own.

Secretary General of the International Buddhist Confederation, Dr Dhammapiya, was there as well as were diplomats from countries such as Myanmar, Vietnam, Cambodia, Singapore, Nepal and Thailand.