"Unbecoming Of A Minister": BS Yediyurappa Rebukes Minister For Remarks On Woman

"What he (Madhuswamy) has said is not right, I will warn him. No one can forgive speaking to a woman in such an explicit manner. His behaviour is unbecoming of a minister," BS Yediyurappa said. 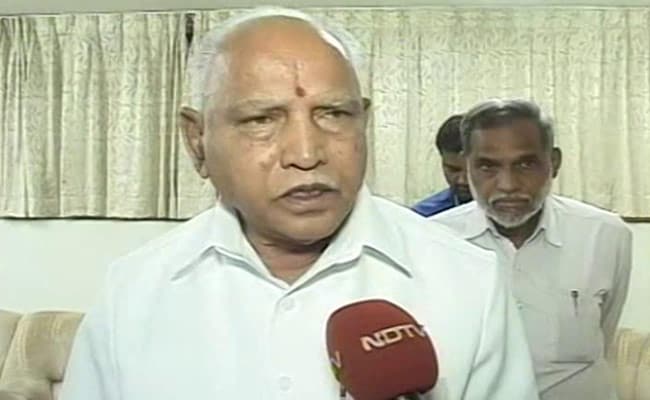 "What he (Madhuswamy) has said is not right, I will warn him. No one can forgive speaking to a woman in such an explicit manner. His behaviour is unbecoming of a minister," BS Yediyurappa said.

Speaking to reporters, the Chief Minister said, "I'm aware of the matter, I will speak to the woman. I will see to it that such incidents don't repeat."

Mr Madhuswamy on his part has apologised and said he felt "intimidated."

The woman is a representative of Karnataka Raita Sangha and Hasiru Sene in Kolar and the alleged incident occurred on Wednesday during an inspection.

The video footage of the incident in which Mr Madhuswamy, who is minister for Minor irrigation, Law and Parliamentary Affairs, is heard asking her to speak her grievance and "not to command", has been aired by local news channels.

He is purportedly heard saying he is a "very bad man."

The minister also asks police to take her away as she questions him about encroachment of a lake.

Criticising the minister for his conduct, the Leader of Opposition Siddaramaiah said BS Yediyurappa should make the minister apologise to the woman, and drop him from the ministry.

Congress state president D K Shivakumar said being in public life, one should hear grievances of people with patience.

"I support Siddaramaiah's demand to drop him (Madhuswamy) from the ministry," he added.

Speaking to reporters, Madhuswamy said if he has hurt the feelings of any woman, he will apologise.

"I did not speak identifying the person as woman or from farmers'' organisation.

"When an individual spoke crossing the limits, as some one having self-respect, I reacted. If the wording is wrong, I apologise......the way she behaved was very bad. I too should not have used (the words)...I spoke the way I did because I was intimidated," he added.