BRICS Must Intensify Efforts Against Terror, Its Sponsors: PM Modi 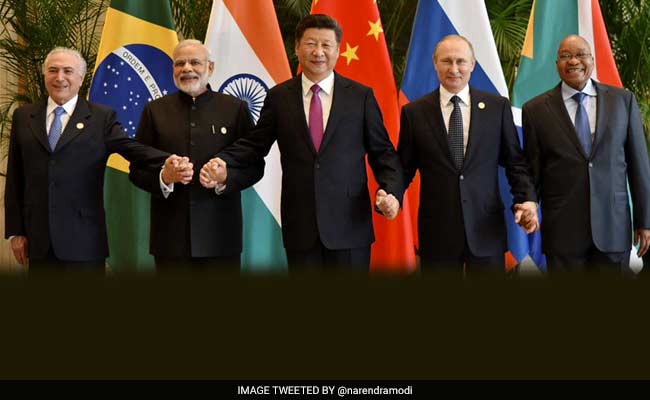 Leading from the chair, PM Modi gve a hard-hitting address at the BRICS Leaders Meeting.

Hangzhou: India today called on other BRICS members to intensify joint efforts to combat terrorism as Prime Minister Narendra Modi, in an apparent reference to Pakistan, demanded "coordinated actions" by the grouping to "isolate supporters and sponsors of terror".

Leading from the chair, PM Modi in his hard-hitting address to the BRICS Leaders Meeting in Hangzhou said "terrorists in South Asia, or anywhere for that matter, do not own banks or weapons factories".

"Clearly, someone funds and arms them and BRICS must intensify joint efforts not just to fight terror but to coordinate actions to isolate those who are supporters and sponsors of terror," he said, without naming Pakistan. But the reference was clearly aimed at Islamabad - a close ally of China.

Describing BRICS as "an influential voice" in international discourse, Modi said it was the grouping's shared responsibility to shape the global agenda and help developing nations achieve their objectives.

He said terrorism remains the "primary source of instability and the biggest threat" to our societies and countries and the supply chains have a global reach. Use of social media to promote radical ideology is "increasing (the) dimension of this threat", he added.

External Affairs Ministry spokesperson Vikas Swarup during a media briefing said "(PM Modi's address to the BRICS Leaders Meeting) tells you how strongly the prime minister intervened on the issue of terror and how he believes that this really is the central challenge facing the moment and unless we have collective approach to this, it will not be possible for us to defeat this."

Later, a joint statement issued by the grouping said: "The leaders strongly condemned the heinous acts of terrorism that continue to disrupt global peace and security and undermine social and economic confidence."

"They expressed deep sympathy and support to the innocent victims of terror acts and condemned recent terrorist attacks in various cities of the world," it added.

Mr Swarup also said it was important to have informal discussions with other BRICS leaders ahead of the grouping's 8th annual Summit in Goa from October 15-16. Earlier in his brief address, PM Modi said: "We, as BRICS, are an influential voice in international discourse. It is, therefore, our shared responsibility to shape the international agenda.

"Our shared responsibility to shape international agenda in manner that helps developing nations achieve their objectives," he said in this picturesque eastern Chinese city on the sidelines of the G20 Summit.

PM Modi said "'Building Responsive, Inclusive and Collective Solutions' is the theme we have chosen which mirrors central priorities at G20 Summit".

"We've taken BRICS out of capitals to involve people from all walks of life. It will be an opportunity to deepen our ties and with BIMSTEC (Bay of Bengal Initiative for Multi-Sectoral Technical and Economic Cooperation) countries." The four other leaders who participated in the meeting of the five-member bloc included new Brazilian President Michel Temer, Russian President Vladimir Putin, Chinese President Xi Jinping - with whom PM Modi held bilateral talks earlier, and South African President Jacob Zuma.

"Our summit next month would not only be an opportunity to deepen ties with ourselves, we will also interact with India's neighbouring countries of BIMSTEC - Nepal, Bhutan, Bangladesh, Sri Lanka, Myanmar and Thailand, who have been invited for the outreach summit. We welcome you all to Goa next month," PM Modi said concluding his address.

According to the joint statement, BRICS leaders recognised that member countries were confronted with "new challenges in their respective economic growth".

They concurred that the global economic recovery faces significant downside risks and underlined the significance of macroeconomic policy coordination among G20 member countries to achieve sustainable and balanced growth.

BRICS recognised innovation as a key driver for mid and long term growth. "In this regard, they welcomed the G20 Blueprint on Innovative Growth," it said.

Stressing that an effective global financial architecture is crucial to achieve growth, they underscored that "the IMF quotas do not reflect present day's global economic realities."

They urged G20 member countries in collaboration with IMF to step up efforts to increase the institution's quota resources and review the distribution of quotas and votes to ensure fair reflection of emerging and developing economies.

The leaders welcomed the progress in the functioning of New Development Bank (NDB) - formerly referred to as the BRICS Development Bank. They expressed satisfaction at NDB's approval of first set of loans to member countries in renewable and green energy sectors, the statement said.

BRIC began as a formal grouping, after the meeting of the Leaders of Russia, India and China in St Petersburg on the margins of G8 Outreach Summit in 2006.

The grouping was formalised during the 1st meeting of BRIC Foreign Ministers on the sidelines of UN General Assembly in New York in 2006. The 1st BRIC Summit was held in Yekaterinburg, Russia, on June 16, 2009.

BRIC was expanded into BRICS with the inclusion of South Africa at Foreign Ministers' meeting in New York in September 2010.