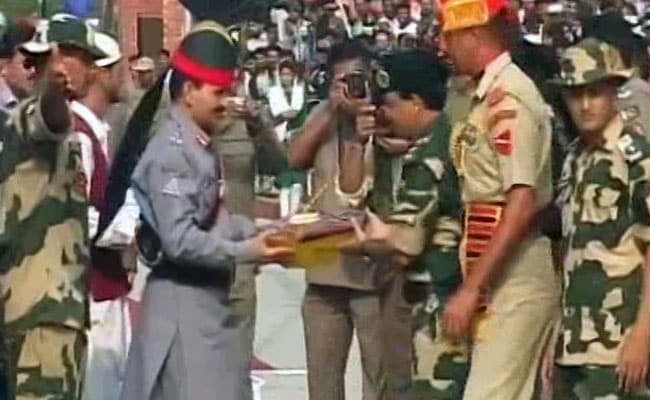 Soldiers from India and Pakistan exchanged sweets at Atari-Wagah border on August 14, 2016.

Attari/Jammu: Border Security Force on Monday gifted traditional Indian sweets to Pakistani Rangers at the Attari-Wagah border on the occasion of Independence Day.

Handing over sweets to their counterparts, BSF and Pakistani Rangers personnel looked relaxed as they hugged and shook hands with each other besides sharing pleasantries for a few minutes.

On Sunday, Pakistani Rangers had offered traditional Pakistani sweets to their Indian counterparts on the occasion of Independence Day of Pakistan.

The BSF and Pakistan Rangers also exchanged greetings and sweets at four different places along the International Border (IB) in Jammu and Samba sector of J&K on India's 70th Independence day.

The two forces greeted each other and exchanged sweets in Samba, Arnia and R S Pura sectors of the IB, a BSF officer said.

Both the border guarding forces committed to maintain peace and tranquillity on the International Border (IB) in Jammu, he said.