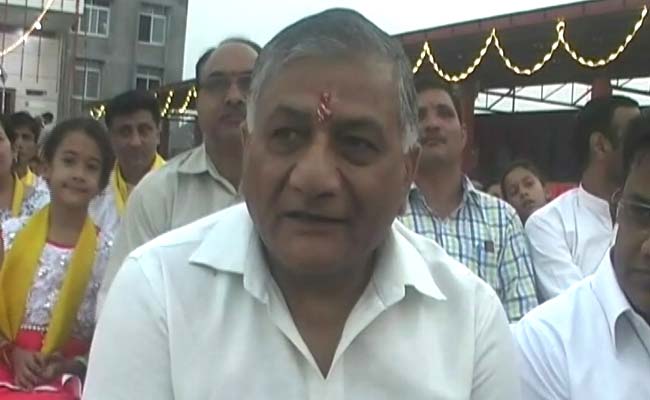 New Delhi: While there are no border disputes with Myanmar, Bangladesh and Sri Lanka, such disputes exist with China and Pakistan, Minister of State for External Affairs VK Singh said on Thursday.

"In the eastern sector, China claims approximately 90,000 square metres of Indian territory in the state of Arunachal Pradesh," Mr Singh stated in a written reply in the Rajya Sabha.

"Indian territory under the occupation of China in Jammu and Kashmir is approximately 38,000 square metres. In addition, under the so-called China-Pakistan 'Boundary Agreement' signed between China and Pakistan on March 2, 1963, Pakistan illegally ceded 5,180 square km of Indian territory in PoK (Pakistan-occupied Kashmir) to China," he said.

The minister said the fact that Arunachal Pradesh and Jammu and Kashmir were integral and inalienable parts of India has been clearly conveyed to the Chinese side on several occasions, including at the highest level.

According to him, the two sides have agreed to each appoint a special representative to explore the framework for a boundary settlement from the political perspective of the overall bilateral relationship.

"A meeting of WMCC was held in Beijing on October 8, 2015. India and China are committed to resolve bilateral issues through dialogue and peaceful negotiations and in a fair, reasonable and mutually acceptable manner," he added.

As for Pakistan, Mr Singh said India was willing to address all outstanding bilateral issues through peaceful means.

"However, continued support by Pakistan to terrorism directed at us from the territory under Pakistan's control has prevented creation of necessary environment. (Indian) Government has urged Pakistan on several occasions to fulfill its assurances, given and reiterated at the highest level, to put an end to anti-India activities on its soil and territories under its control," he stated.

Regarding Nepal, the minister said strip maps covering 98 per cent of the India-Nepal boundary have been authenticated and initialed in 2007 at the Surveyor-General level, "though they are yet to be signed at the plenipotentiary level".

"Issues relating to the maintenance and management of the India-Nepal boundary are discussed in existing bilateral mechanisms at both senior official and working levels," he stated.

"Our unique, centuries-old civilizational ties with Nepal, based on shared geography, history, culture, language and religion and characterised by close political relations, wide-ranging economic cooperation and deep-rooted people-to-people friendship, have been rejuvenated since May 2014 with sustained interaction at the highest political level, including the prime minister's two visits to Nepal in 2014."

Mr Singh also informed the house that the India-Nepal Joint Commission was revived at the level of external affairs minister in July 2014.

"India continues to maintain close engagement and bilateral exchanges with Nepal, as well as extend all assistance in accordance with the aspirations of the people of Nepal, for peace, stability and socio-economic development of the country," he stated.

On Bangladesh, the minister said India and Bangladesh shared a 4096.7-km border, which was the largest land border that India shared with any of its neighbouring countries.

"Both countries concluded a Land Boundary Agreement (LBA) in 1974, soon after the independence of Bangladesh, to find a solution to the complex nature of border demarcation," he said.

The agreement was implemented in its entirety with the exception of three issues pertaining to (1) undemarcated land boundary of approximately 6.1 km in three sectors, viz. Daikhata-56 (West Bengal), Muhuri river-Belonia (Tripura) and Lathitila-Dumabari (Assam); (2) exchange of 111 enclaves in Bangladesh with 51 Bangladesh enclaves in India; and (3) adverse possessions.

"During the visit of then prime minister Manmohan Singh to Bangladesh in September 2011, a protocol to the 1974 LBA was signed which settled these three outstanding issues,Mr Singh said.

"Subsequently, instruments of ratification of the agreement were exchanged on June 6, 2015, during Prime Minister Narendra Modi's visit to Bangladesh," he added.