India finalised a multi-billion dollar contract with Boeing to procure 22 Apache helicopters and 15 Chinooks for the IAF in September 2015. Both the Apache and Chinook helicopters have been pressed into service as part of the air force's deployment along the Line of Actual Control. 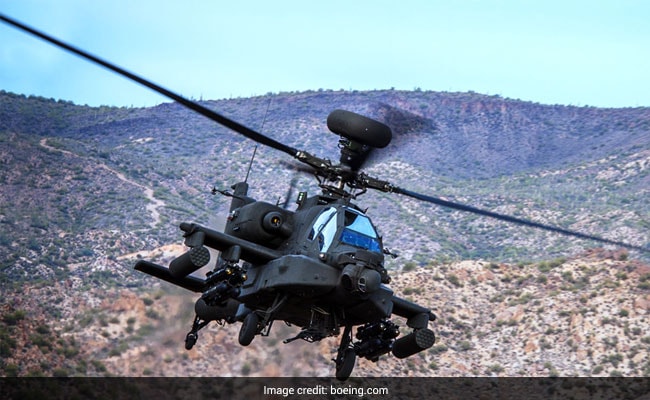 In the midst of heightened tension between India and China, US aerospace major Boeing delivered the final five of the 22 Apache attack helicopters to the Indian Air Force last month, and the fleet has now been part of the assets deployed in key air bases along the Line of Actual Control, officials said today.

Boeing said it completed delivery of all 22 Apache and 15 Chinook military helicopters to the Indian Air Force and is fully committed to meet their operational needs of the Indian armed forces.

The AH-64E Apache is one of the world's most advanced multi-role combat helicopters, and is flown by the US Army. The Chinook is a multi-role, vertical-lift platform, primarily used for transporting troops, artillery, equipment and fuel.

India finalised a multi-billion dollar contract with Boeing to procure 22 Apache helicopters and 15 Chinooks for the IAF in September 2015.

Both the Apache and Chinook helicopters have been pressed into service as part of the air force's deployment along the Line of Actual Control in view of the bitter standoff with China in eastern Ladakh, officials told news agency Press Trust of India.

"With this delivery of military helicopters, we continue to nurture this partnership and are fully committed to working closely with India''s defence forces to deliver the right value and capabilities to meet their operational needs," said Surendra Ahuja, Managing Director, Boeing Defence India.

India is one of 17 nations to select the Apache and has the most advanced variant, the AH-64E Apache.

Defence and security ties between India and the US have been on an upswing in the last six years. The bilateral defence trade touched USD 18 billion mark in 2019, reflecting growing defence cooperation between the two sides.

Both sides have also been pushing for joint venture and collaboration between private sectors of the two countries in defence manufacturing.

In June 2016, the US had designated India a "Major Defence Partner", intending to elevate defence trade and technology sharing with New Delhi to a level commensurate with that of its closest allies and partners.

"In addition to classifying air and ground targets, the fire control radar has been updated to operate in the maritime environment. It is uniquely suited to meet a commander''s needs, including reconnaissance, security, peacekeeping operations, and lethal attack, across myriad environments - without reconfiguration," Boeing said.

It said 20 defence forces around the world either have Chinooks in service, or are on contract to receive them.

"The iconic tandem-rotor helicopter has been the world's most reliable and efficient heavy-lift helicopter for more than 50 years, allowing customers to operate in climatic (hot), altitude (high), and crosswind conditions," the company said.

Earlier this year, India and the US signed a contract for the acquisition of six Apaches for the Indian Army during President Donald Trump's visit to Delhi.

Boeing's joint venture with Tata in Hyderabad has been producing aero-structures for the AH-64 Apache helicopter for both US Army and international customers.