The BJYM supporters marched from Babughat and gathered in front of Eden Gardens stadium demanding the removal of the pictures. 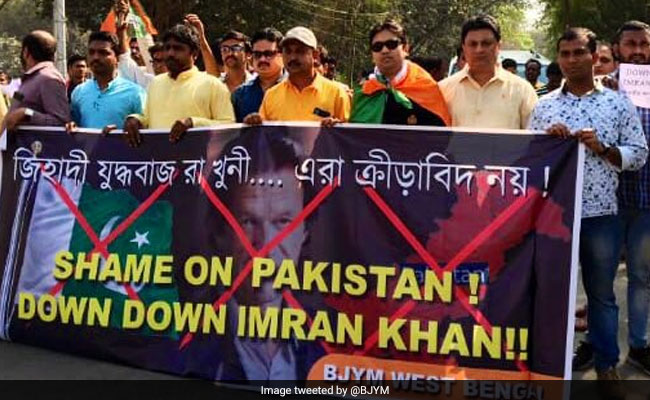 A day ago, Bengal BJP president in the march to Eden Gardens demanding removal of posters.

Activists of Bharatiya Janata Party's youth wing were arrested on Saturday for trying to forcibly enter the Eden Gardens in Kolkata to demand pictures of Pakistan's World Cup winning captain and current Prime Minister Imran Khan and other Pakistani cricketers be removed in wake of the Pulwama terror attack.

The BJYM supporters marched from Babughat and gathered in front of the stadium demanding the removal of the pictures.

CAB president and former India captain Sourav Ganguly later said a decision on whether to remove the photos will be taken soon.

"We are working on it. There will be a decision soon," he told reporters on the sidelines of an event.

A day ago, Bengal BJP president Dilip Ghosh also participated in a march to the Eden Gardens demanding the removal of the posters.

The Board of Control for Cricket in India (BCCI) recently removed the poster of the Pakistan cricket team from their headquarters in Mumbai.

The relations between India and Pakistan have hit a new low following a suicide attack on a CRPF vehicle in Pulwama that resulted in the death of over 40 CRPF troopers on February 14.

Terrorist outfit Jaish-e-Mohammed, which operates out of Pakistan, has claimed responsibility for the attack.