BJP website hacked: Sources say that no compromising information was stolen from the site but another attack was a "clear and present danger". 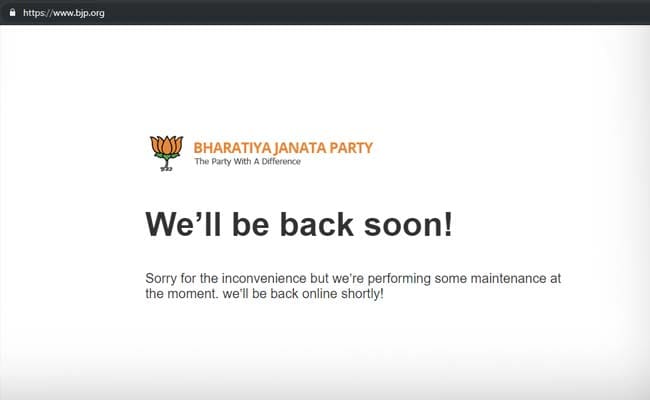 For months, the BJP had been planning an overhaul of its website. So when it was taken down in a hacking incident last week, party sources said, they decided it was time to put it back better than it originally was. The revamped website should be up in a day or two, they added.

The BJP website has been "under maintenance" since it was allegedly hacked and replaced with a meme mocking Prime Minister Narendra Modi on March 5.

According to sources, the meme points to political sabotage and the party suspects it was the work of "political adversaries".

"The website could have been brought back up in matter of hours. But we decided to use the bugging as an opportunity to complete a plan to revamp it. The plan had been in place for two to three months. The site's technology had not been upgraded for five years. ," sources told NDTV.

On Tuesday, IT Minister Ravi Shankar Prasad had said that the BJP website was hacked "for a few minutes" but the party managed to get back control "very soon".

"There are rogue elements in the society. The site was hacked only for a few minutes. We got back control very soon," Mr Prasad said in the first admission from the government about the BJP site being hacked.

His statement contradicted BJP IT cell head Amit Malviya who had said last week that the site was not hacked. While admitting that the site had experienced some sort of "transgression", Mr Malviya said the site was down due to a "technical glitch", not hacking.

But till late Wednesday, the message on site still read: "We'll be back soon! Sorry for the inconvenience but we're performing some maintenance at the moment. We will be back online shortly!"