BJP Website Down For 4 Days, Expert Says "Seems Even The Backup Is Gone"

A website cannot remain in the "maintenance mode" for so long, unless the whole portal is being redesigned from scratch after the data bases have been compromised, say experts. 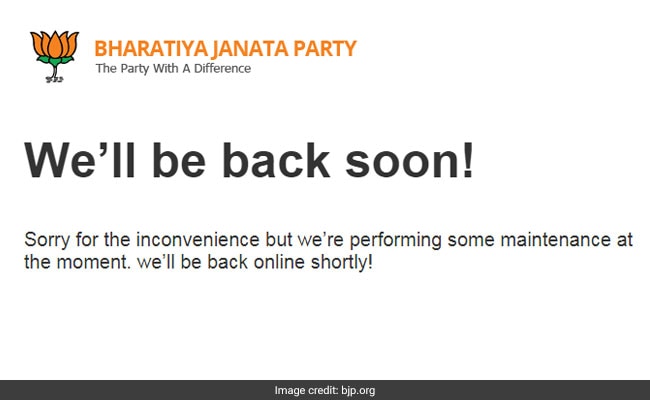 The message on the BJP website reads: "We'll be back soon."

Imagine the website of Donald Trump's Republican Party in the "maintenance mode" for over four days after some sort of "transgression" or a full-fledged hacking. If that appears impossible, imagine this: The portal of India's ruling Bharatiya Janata Party (BJP) that was allegedly hacked on Tuesday morning was still down today after going into "maintenance mode".

A website cannot remain in the "maintenance mode" for so long, unless the whole portal is being redesigned from scratch after the data bases have been compromised, say experts.

The message on the BJP website reads: "We'll be back soon! Sorry for the inconvenience but we're performing some maintenance at the moment. We will be back online shortly!"

According to ethical cyber hackers, a portal that is "down" for four-five days can only be in that mode if the entire coding is being done and content being generated.

"Looks like BJP is redesigning the whole website as not only the data base but the entire backup is also gone -- only if the daily backups were being done in the first place -- hence it is taking so long for them to up the website again," Manan Shah, Founder and CEO, Avalance Global Solutions, told IANS.

"Normally, the security audit in case of hacking or some sort of transgression takes two-three hours and portal is normally up within a day. This looks like serious hacking as it has wiped out everything from static and dynamic content," Mr Shah added.

The Congress Gujarat website was also hacked on Wednesday but it was up soon after.

"Some Indian hacker or group may also be behind the hacking. It appears hackers are getting active as elections are near and cyber warfare will only get intense," said Manan Shah.

Mr Shah and his expertise in cyber forensics has helped Gujarat and Rajasthan police, Ministry of Defence and CBI Gandhinagar in safeguarding their platform against cyber attacks.

The Chhattisgarh BJP website was also hacked recently which is also "under maintenance".

On Wednesday, BJP's IT cell head Amit Malviya said the portal is likely to be up "by tonight or tomorrow".

While admitting that the site had experienced some sort of "transgression", Mr Malviya said the site was down due to a "technical glitch", not hacking.

On Thursday, Pratik Sinha, co-founder of AltNews, tweeted: "BJP website has been down for THREE days after being hacked. Were they not doing daily back-ups of their website/database? It would have taken only hours to come back online, if they had a recent back-up. Did BJP fail to follow the standard practices followed by most websites?"

French security researcher who goes by the name of Elliot Alderson and who published Aadhaar data leaks in the past, also tweeted: "The official website of @BJP4India has been hacked. I guess they stole the database too".