The BJP urged the Election Commission to bar West Bengal Chief Minister Mamata Banerjee from campaigning in the state. 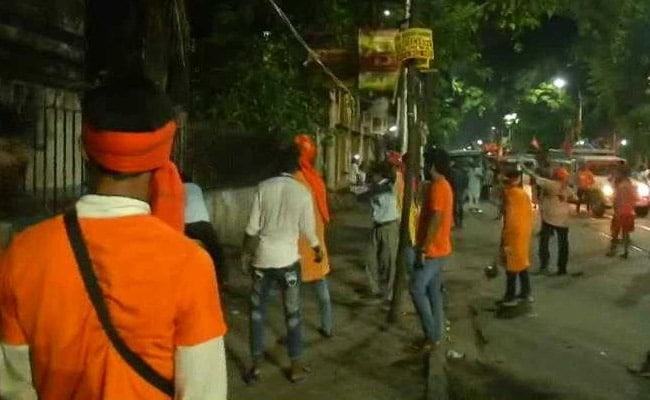 The BJP on Tuesday urged the Election Commission to bar West Bengal Chief Minister Mamata Banerjee from campaigning in the state and alleged that "constitutional machinery" has collapsed there.

After violence and arson marred BJP president Amit Shah's road show in Kolkata, a party delegation, including Union ministers Nirmala Sitharaman and Mukhtar Abbas Naqvi, rushed to the EC, seeking its immediate intervention to ensure free and fair polls in the state.

Mr Naqvi accused Ms Banerjee of "complicity" in violence allegedly aimed at the BJP, claiming that she has been "provoking" her Trinamool Congress workers to attack the party's functionaries.

"She holds a constitutional post but has been using unconstitutional comments, asking her party workers to take revenge and indulge in violence. She is complicit. She should be immediately barred from campaigning," he told reporters after the BJP delegation met the EC.

The "goons" of the TMC have hijacked the state administration and the violence in Mr Shah's road show is an example of this, he claimed.

The credibility of the commission is at stake, he said, likening the situation in the state to Bihar in 2005 when the EC had sent a special representative to take control of the administration there to ensure free and fair polls.

The BJP also demanded that "miscreants" and "history-sheeters" present in the constituencies, which go to polls in the last phase of the Lok Sabha election on May 19, should be arrested and removed from these places.

Central forces should also carry out flag march in the poll-bound seats, the party told the EC.

BJP and TMC supporters on Tuesday fought pitched battles on the streets of Kolkata during a massive road show by Mr Shah, who escaped unhurt but was forced to cut short the jamboree and had to be escorted to safety by the police.

Parts of the city plunged into a welter of violence as his convoy was attacked with stones by alleged TMC supporters from inside the hostel of Vidyasagar College, triggering a clash between supporters of the two parties, officials said.

Furious BJP supporters retaliated and were seen exchanging blows with their TMC rivals outside the college entrance.

Several motorcycles parked outside were vandalised and set ablaze.

Shards of broken glass littered the lobby of the college where a bust of Ishwar Chandra Vidyasagar, a noted philosopher and a key figure of Bengal Renaissance, was smashed to pieces. Police personnel were seen trying to douse the fire with buckets filled with water.

Contingents of the Kolkata Police deployed for the roadshow swung into action and were seen chasing away the warring groups.