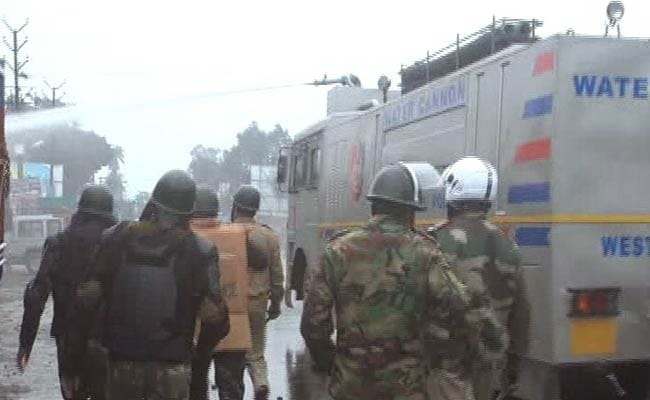 The police had to use water canons and resort to a lathicharge to break up the brawling students of the CPI(M) and Trinamool student bodies.

Kolkata: At least two people suffered bullet injuries in a clash between members of the Trinamool Chattra Parishad and the BJP student wing, or ABVP, at Itahar in Bengal's North Dinajpur district on Monday.

The clash took place near the Meghnad Saha College when the students were going to file nominations for the college union elections due later this month, police said.

The BJP-backed students' body claimed three persons sustained bullet injuries and all of them were ABVP members. The attack, they claimed, was made by the Trinamool supporters.

The chief of the Trinamool students' body, Ashok Rudra, however, denied any role in the firing. "Our opposition is getting outsiders and they are the ones who opened fire," he said.

State BJP leader Rahul Sinha has demanded that all college elections be suspended. "On Monday, for the first time in the college elections in the state, guns were used by Trinamool to prevent people from filing nominations. I appeal to Chief Minister Mamata Banerjee to suspend the elections at once," he said.

The Left has condemned the firing at Itahar and blamed the Trinamool students' body for it. They also claimed former minister Srikumar Mukherjee, who was on the spot, was the target.

"Tirnamool's miscreants hurled bombs and fired at Left student unions at Itahar. The police, instead of cracking down on the miscreants, acted as mere bystanders," said Left Front secretary Biman Bose.

Promoted
Listen to the latest songs, only on JioSaavn.com
Clashes also took place at Raiganj in front of Surendra Nath College. The police had to use water canons and resort to a lathicharge to break up the brawling students of the CPI(M) and Trinamool student bodies. Nineteen people, including a policeman, were injured in the incident.

The violence at Itahar and Raiganj is the latest in a series of clashes between rival student unions over college elections. There are about 450 colleges in Bengal. The poll process started in mid-December and has to end by January. So far, the election process has been completed in about 250 colleges. The Trinamool students' body won uncontested in 200-odd colleges.