Biplab Deb said that BJP workers have been asked asked to rebuild the statue. 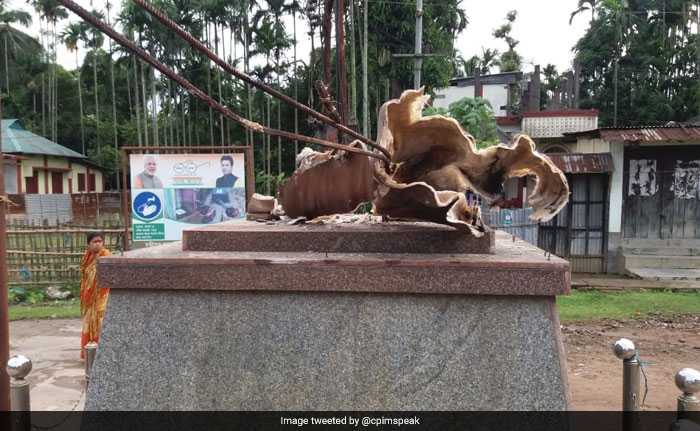 The CPI-M tweeted this picture from their official account.

Speaking to reporters on the sidelines of an event at Prajna Bhawan in Agartala, Mr Deb said deliberate attempts were being made to discredit the BJP-IPFT government of Tripura with statue vandalism incidents.

Baidyanath Majumder's statue was vandalised at Srirampur in Unakoti district, about 185 km from state capital Agartala, late on Wednesday night.

The Opposition CPM has alleged that BJP supporters were behind the incident. Two persons have so far been arrested in the case.

"Conspiracies are being hatched to discredit the BJP-IPFT government before public. I know about Baidyanath Majumder. I was not into politics (when he was a politician). I was a student then. But I know that Majumder was a good man, Mr Deb said.

He also said an inquiry was ordered to unearth the truth behind the incident.

He added that his government was not of the type to support desecration of statues and other such icons. My government is not of this type. Trust me. There are efforts to hold conspiracy against us. People trust me, they believe in our actions. But there are some people who have old habits. They want to involve people in conspiracy against us, the chief minister said.

"I am told that two persons were arrested. They were also released on bail. I have spoken to the Director General of Police and asked him to submit report on reasons of the vandalism," Mr Deb added.

"I have asked the DGP to furnish reasons behind the incident. I shall unearth the truth at any cost," the CM said.

Mr Deb said that BJP workers have been asked asked to rebuild the statue.

If there is any fund deficit, the state government will provide support, he told reporters.

Superintendent of Police (Unakoti) Lucky Chouhan, however, told reporters that no political connection to the incident was established so far.

Two persons were arrested so far. We suspect more to be involved. Investigation is being continued, she said.