Two people were killed and several others injured in political clashes that broke out in the area, which comes under the Barrackpore Lok Sabha constituency, on Thursday. 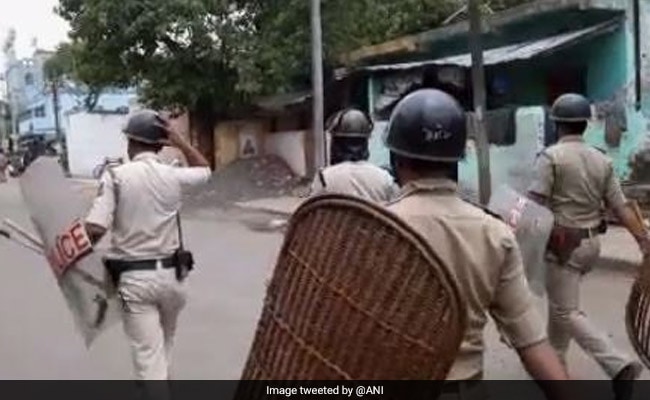 Restrictions on public gatherings under Section 144 of CrPC have been imposed in Bhatpara.

A day after two people were killed and several others injured in political clashes that erupted in West Bengal's Bhatpara, the BJP today announced that it will send a three-member delegation led by former Union Minister SS Ahluwalia to review the situation on Saturday.

The delegation will prepare a report which will then be submitted to party president and Union Home Minister Amit Shah, party sources claimed. The ruling Trinamool Congress and the BJP have both blamed each other for the clashes, which occurred amid a tussle for political dominance over the area.

The authorities have imposed restrictions under Section 144 of the CrPC at Bhatpara -- which comes under the Barrackpore Lok Sabha constituency -- in the wake of the clashes. Despite this, BJP parliamentarian Arjun Singh has threatened to take out a protest march with the bodies of the two people killed in yesterday's violence. He has submitted a memorandum to the police to demand action against "criminals" who have been active in the area since the conclusion of the Lok Sabha elections.

The BJP also took out a protest in Kolkata this evening to protest alleged police apathy in Bhatpara and its surrounding areas. "How can peace be restored if the police force is not neutral? The police have to fulfil their obligation of neutrality and arrest criminals, whoever they are. People here are poor, and they live in constant fear of the police," Arjun Singh told NDTV.

Meanwhile, tensions continued to ride high in Bhatpara. Even this morning, unidentified people hurled bombs that fortunately failed to explode. BJP supporters, for their part, laid siege to the Barrackpore police commissionerate to protest police inaction against their Trinamool Congress rivals. At least 16 people have been arrested in connection with the violence so far.

Arjun Singh also accused Chief Minister Mamata Banerjee of inciting violence in the area and preventing the police from taking action against "goons" working at the behest of her party. Incidentally, Barrackpore Commissioner Tanmay Ray Chaudhuri was transferred to the state Criminal Investigation Department only yesterday with Darjeeling Inspector General of Police Manoj Kumar Verma taking his position.

Kailash Vijayvargiya, who is the BJP in-charge of Bengal, claimed that the Trinamool Congress was using brute force to eliminate all opposition in the area. "The kind of terror they have let loose here is unprecedented. They are trying to wipe out BJP cadres and voters from the Bhatpara area, but their strategy will not work," PTI quoted him as saying.

Bhatpara, a Trinamool Congress stronghold until recently, has been witnessing frequent post-electoral violence between the two parties. The conflict intensified ever since Arjun Singh crossed over from the Trinamool Congress to the BJP, and his son -- Pawan Singh -- managed to defeat Trinamool Congress candidate Madan Mitra in by-elections held along with the Lok Sabha polls.