Congress' chief spokesperson Randeep Surjewala alleged that the BJP was raising "superficial" issues on a daily basis to divert the country's attention from the people's issues. 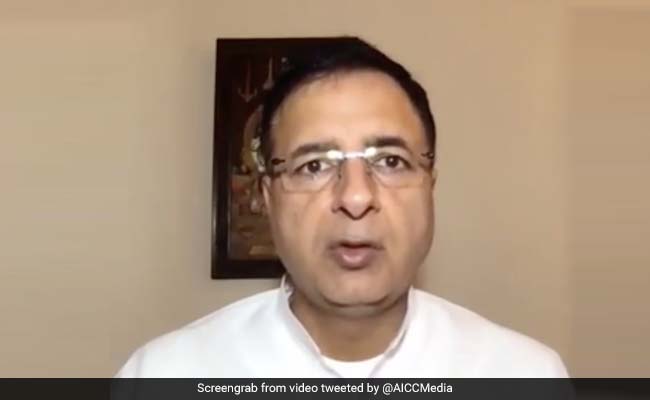 Congress said that BJP was raising "superficial issues on a daily basis".

A day after top BJP leaders accused Rahul Gandhi of belittling north Indians in a speech in Kerala, the Congress on Wednesday said its former chief had given a clarion call to the people to question the government on real issues and the North-South divide was a "toolkit" being sold by the BJP to the public.

Congress' chief spokesperson Randeep Surjewala alleged that the BJP was raising "superficial" issues on a daily basis to divert the country's attention from the people's issues.

His attack came a day after several Bharatiya Janata Party (BJP) leaders and union ministers accused Mr Gandhi of being an ''opportunist'' and alleged that he belittled north Indians during the speech delivered in Kerala.

Addressing a public gathering in Thiruvananthapuram, Mr Gandhi had said, "For the first 15 years, I was an MP in the north. I had got used to a different type of politics. For me, coming to Kerala was very refreshing as suddenly I found that people are interested in issues and not just superficially but going into detail in issues."

Referring to Mr Gandhi's remarks, Mr Surjewala said the former Congress president has given a clarion call to the people to question the government of the day, whether in the states or at the Centre, on issues paramount to people and to "ignore the superficial toolkit story being sold by the BJP day in and day out".

"The North-South divide is a toolkit being adopted and sold by the BJP to the news channels and the public. Let us all rise and ensure that the governments of the day answer on issues and not on superficiality that they want to divert our attention to," he told reporters.

Mr Surjewala asserted that the real issues before the country were of the Gross Domestic Product (GDP) nose-diving and all the small and medium businesses "virtually in ruin".

"It is an issue in this country that the Constitution is under attack and people are under attack by their own government at the Centre and in many states ruled by the BJP," he alleged.

Mr Surjewala said the real issues include that people have "lost their right" to dissent and express themselves.

Mr Surjewala alleged that the Constitution, civil liberties and all institutions of democracy "are under attack", which was an important issue.

Mr Surjewala then cited comments by Prime Minister Narendra Modi and other BJP leaders attacking the opposition, to claim that they tried to divert people's attention from the real issues.

The sharp attack by the Congress came after several BJP leaders, labelling Mr Gandhi's comments as anti-north Indians, attacked him and alleged that he was being an opportunist despite him and his family members having won several elections from Amethi in Uttar Pradesh.

Mr Gandhi, who was representing the Amethi constituency of Uttar Pradesh in the Lok Sabha since 2004, contested from the Wayanad seat in Kerala simultaneously in the 2019 general elections .

Although, he lost Amethi to Smriti Irani of the BJP, he won from the Congress bastion in Kerala.

Teen Arrested For Sexually Assaulting His 4-Year-Old Neighbour: UP Cops