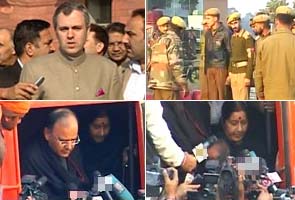 The Chief Minister had told NDTV that he called Arun Jaitley to invite him, and that Jaitley responded by saying he will get back after talking to Sushma Swaraj. He also said that he appreciates that the BJP yatra concluded peacefully.

But BJP leaders rejected the offer. Party sources said "Omar can't invite the leaders to flag hoisting after arresting them for the same."

On Tuesday afternoon, Ms Swaraj and Mr Jaitley addressed a rally in Punjab at Madhopur for a marathon four hours at one end of a one-kilometre bridge that stood between them and Jammu.  Then they headed over to the other side.

It was a dramatic sight. Sushma Swaraj and Arun Jaitley, aboard a BJP rath, moving slowly across the bridge. They were accompanied by 500 BJP workers. Once the procession arrived at Lakhanpur in J&K, Ms Swaraj and Mr Jaitley were arrested.

The leaders were arrested for violating Section 144 which bans the assembly of more than four persons at any particular place. They were reportedly lodged in a hotel in Kathua overnight and released at around 12:30 pm today.

That was always the plan. The J&K government had made it clear that after the bride over the River Ravi was crossed, BJP activists would be arrested to prevent them from heading to Srinagar, where the party wants to end its Ekta Yatra by unfurling the national flag at Lal Chowk.

But that sensitive spot in the heart of Srinagar has been declared out of bounds by the government which wants to minimise tension in the fragile area. In 1948, this is where Jawaharlal Nehru announced a plebiscite for Kashmir. The separatists had announced a counter-march to take on the BJP.

Before they were taken into custody, Mr Jaitley and Ms Swaraj gave detailed statements from the door of their rath. "This is a panic reaction by the J&K government," said Mr. Jaitley. "We will stay here (in J&K) till the evening of the 26th," declared Ms Swaraj.

On Monday night, Ms Swaraj, Mr Jaitley and their colleague Ananth Kumar were unceremoniously evicted from Jammu and Kashmir after a lengthy drama which played out as much on Ms Swaraj's twitter account as it did at the Jammu airport.

The trio landed on a chartered flight at 3:20 pm on Monday. The local administration greeted them with the news that they would not be allowed to leave the airport for Jammu city, where they were scheduled to hold a rally on Monday morning.

For several hours, the BJP leaders protested on the tarmac. Ms Swaraj shared her predicament with a steady shower of tweets. Around 6 pm, Home Minister P Chidambaram called Mr Jaitley and asked him to return to Delhi. "I spoke to Shri Arun Jaitley and Shri Omar Abdullah. I told Shri Jaitley that he and his colleagues had made their point and that they should not defy the orders of the State Government which was the best judge to decide whether there was a threat to law and order and public peace. I requested them to return to Delhi. The BJP leaders were also offered an opportunity to address a press conference at Jammu airport and, thereafter, leave Jammu & Kashmir. Regrettably, they turned down the offer."

The BJP leaders refused, but were moved into a VIP lounge at the airport. At 9 pm, they were moved in separate cars out of the airport. Ms Swaraj, on twitter, explained, "The state administration told us we are being taken to the jail."

Mr Jaitley said on Tuesday that the prevention of the BJP yatra by the Centre and state governments is "total psychological surrender to separatists." He also stressed that till Monday evening, when the Home Minister phoned him at the Jammu airport asking him to fly back to Delhi, the Central government had made no effort to talk to the BJP about its plans for its Srinagar yatra. "What the government did by diverting trains and expelling leaders amounts to hijack," he said. "The state government and Centre worked in tandem to set an unprecedented example. I hold the Prime Minister responsible - as he heads the government which is denying basic rights."