"When It Comes To Beating Up Someone...": Sunny Deol Slammed For Remark

Reacting to Sunny Deol's remark, Congress MLA from Bhoa assembly constituency, Joginder Pal said that it was the party's fault for having chosen an actor to become a leader. 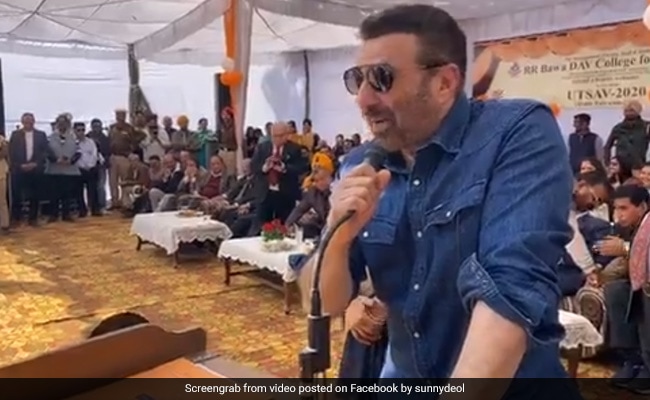 Sunny Deol began a three-day rally in his constituency on Saturday. (File)

Actor-turned-politician Sunny Deol has drawn a lot of criticism for his recent statement from the Congress after he claimed that he was second to none when it comes to "beating up someone".

"I have been told state government employees harass people and tell them they've elected the wrong person. I do not interfere in such trivial issues. I do not believe in making controversial remarks but everyone knows that no one is better than me when it comes to beating up someone," Mr Deol, BJP MP from Gurdaspur, had recently said when he was addressing a rally in Punjab's Pathankot.

Reacting to this, Congress MLA from Bhoa assembly constituency, Joginder Pal, said that it was the BJP's fault for having chosen an actor to become a leader.

"Sunny Deol is not at fault... he has no knowledge of politics. It's BJP mistake. I do not know what forced Sunny to come into politics. He is dancing today just like he used to dance in films earlier," Mr Pal told reporters.

On Saturday, Mr Deol began a three-day rally with an aim address the problems of the people in different districts of the state.

On the first day of the rally, he had said that he had come to meet people of Pathankot and listen to their problems. "We have just come here to visit and meet people and do our work," Mr Deol told reporters on Saturday.

The fresh controversy comes nearly a month after his "missing'' posters were seen near a railway station in Pathankot. The posters put up on the walls read - "Gumshuda ki talash MP Sunny Deol (Search for missing MP Sunny Deol)".