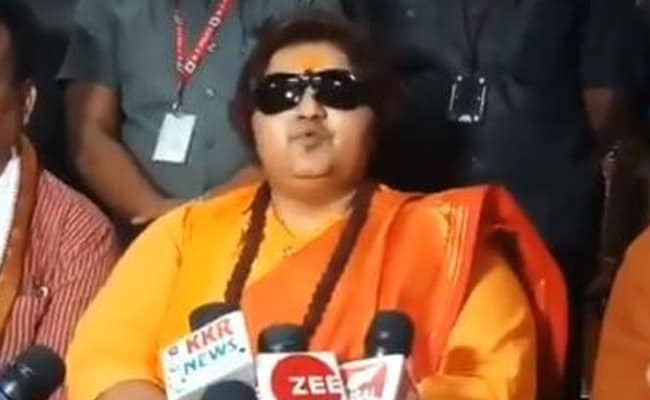 Bhopal Police have filed an FIR against unidentified persons and launched a probe based on a complaint by BJP MP Pragya Singh Thakur over multiple calls threatening and abusing her, an official said on Wednesday.

Kamla Nagar Police Station in-charge Vijay Sisodia said, "A case has been registered against unidentified persons on Tuesday night for threatening the MP over phone and using abusive language."

He said Ms Thakur received these calls from unknown numbers around 6.30 pm on Tuesday.

Mr Sisodia said, "The callers also abused her over the phone. The cyber cell is trying trace the loation from where the calls were made. Appropriate action will be taken against the accused on the basis of information received from the cyber cell."

Meanwhile, Ms Thakur, talking to reporters on Wednesday, said, "There were many calls yesterday. The phone displayed private and international numbers during these calls. The callers used very abusive language."

Ms Thakur said the callers also abused her for making an appeal to people to recite 'Hanuman Chalisa' and for supporting the construction of the Ram temple in Ayodhya, adding she will not get cowed down by such acts.

"Such threats do not affect me. These are cowards, who are afraid. So they call from unknown numbers," she said.

On Saturday, Ms Thakur had tweeted, "Let all of us together make a spiritual effort to wish people good health and end the coronavirus epidemic. Recite 'Hanuman Chalisa' five times a day at your home from July 25 to August 5. Conclude this ritual by lighting lamps on August 5 and offering 'aarti' to Lord Ram at home."