Ex-ISRO Scientist Nambi Narayanan, who was arrested in 1994 for allegedly selling vital Indian space technology secrets to Pakistan, was charged with espionage. 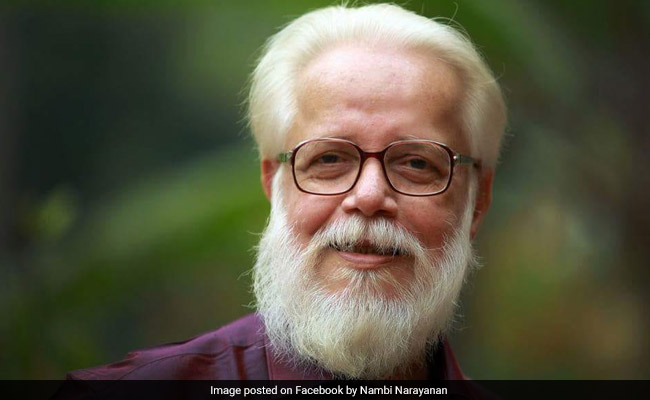 Nambi Narayanan was a scientist at the ISRO, an in-charge of the cryogenics division.

BJP MP Rajeev Chandrasekhar has appealed to the central government to honour former Indian Space Research Organization (ISRO) scientist Nambi Narayanan, who was arrested in an alleged spy scandal in 1994, with a Padma Award or a similar recognition.

"I request the Government of India to ensure that the process of justice is completed by pursuing those that are responsible and holding them to account and to honour Narayanan's struggle - by a Padma Award for a similar recognition by Government of India that recognizes eventual triumph of good over evil," Mr Chandrasekhar wrote in a letter.

The BJP MP further wrote that the arrest of Narayanan had "terrorized the entire ISRO community."

"Regretfully, this is not just a case of a person being falsely accused in a case as stated by the Supreme Court of India, it is also about a brilliant scientist being humiliated, subjected to third degree torture at the behest of some police officers, then apathetic government and its political conspiracy," Mr Chandrasekhar wrote in his letter.

"Nambi Narayanan was a senior scientist at the ISRO, in-charge of the cryogenics division, making rapid progress in the field of liquid technology - a key technology in rocket propulsion that is being deployed in GSLV. He was one of the chief architects of the 'Vikas' engine that is at the heart of India's rockets, the same ones that made missions like Chandrayaan and Mangalyaan possible and which will be involved in many more space voyages in future," the letter said.

"Vikram Sarabhai, the celebrated scientist and father of Indian Space, put his trust in Narayanan and sent him to Princeton University for higher studies on rocket propulsion," he added.

Mr Narayanan, who was arrested in 1994 for allegedly selling vital Indian space technology secrets to Pakistan, was charged with espionage. He was in kept in the police custody for 50 days.

On September 14, the Supreme Court cleared him of spy charges and termed his arrest as "needless" and "unnecessary". It also announced setting up of a committee which would be headed by retired Supreme Court judge DK Jain to investigate into the role of Kerala police officials in the arrest of Narayanan.