Tarun Vijay, a former MP, and Tejasvi Surya, the sitting MP from Bangalore South, set off their journey offering their prayers at the White Horse pagoda where Kumarajiva's first arrival is recorded. 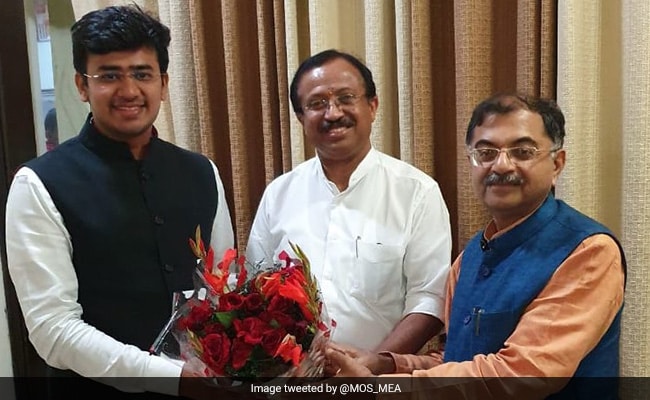 Two BJP leaders Tarun Vijay and Tejasvi Surya on Tuesday launched their 11,050 km-long journey to connect with places traversed by Kumarajiva, the Indian Buddhist monk who brought Buddhism from India to China in 4th century AD and left a lasting influence on the Chinese society and culture.

Mr Vijay, a former MP, and Mr Surya, the sitting MP from Bangalore South, set off their journey offering their prayers at the White Horse pagoda where Kumarajiva's first arrival is recorded.

The Pagoda commemorates the white horse of the Kumarajiva, which believed to have carried Buddhist scriptures all the way from Kucha to Dunhuang in China in 4th century AD.

"Though the Chinese travelers like Xuanzang and Faxian are well known in India with their life stories mentioned in the text books, whereas Kumarajiva, who had the biggest influence on the Chinese society and culture is hardly remembered and celebrated in India," Mr Vijay said in a statement.

"He remains the strongest bridge between the two countries and people hence we are here to celebrate his memory, to revive his great works in India and to reconnect with the Chinese youth through Kumarajiva who is highly respected and studied in China," Mr Vijay said in the statement.

"This shows how little we know about the great Indian monks who went to China taking the message of Buddha and becoming great bridge of friendship. More such studies need to be launched," he said.

Mr Vijay said that he has been working on Kumarajiva's life and history for the last ten years. He visited Mor stupa in Gobi Desert, near Kashgar in China's Xinjiang province earlier and plans to write a comprehensive book on Kumarajiva with pictures of this expedition.

They also brought with them specially collected sacred soil from the Sarrnath Stupa and Ganga Water Kalash from Kashi to be offered at Kumarajiva Temple on Thursday, the statement said.