Read inOther Languages
This Article is From May 17, 2019

The tweets of Anant Kumar Hegde and Nalin Kumar Kateel have vanished from their Twitter timelines. Pragya Thakur apologised for her comments on Nathuram Godse.

The ruling BJP today launched damage control after a rash of comments in favour of Mahatma Gandhi's assassin Nathuram Godse, just two days before the final round of voting for the national election. Pragya Singh Thakur, Union Minister Anant Kumar Hegde and Nalin Kumar Kateel, all contesting the election, have been asked for an explanation within 10 days, BJP president Amit Shah said in a series of tweets on Thursday.

"These comments have nothing to do with the party. All three have apologized, but these comments are against the ideology of the BJP and are being referred to the disciplinary committee," Amit Shah tweeted.

Pragya Singh Thakur, the BJP candidate from Bhopal, had yesterday decribed Godse, who killed Mahatma Gandhi in 1948, as a "deshbhakt (patriot)".

Today, Nalin Kumar Kateel, a BJP lawmaker compared Godse with former prime minister Rajiv Gandhi, who has been a chief target of the ruling party in the national election campaign nearly 30 years after his assassination. Another Karnataka parliamentarian, Union Minister Anant Kumar Hegde, tweeted that "seven decades later, the condemned were being heard".

Both the tweets have vanished from their Twitter timelines. Anant Kumar Hegde put out a message claiming his account had been breached. 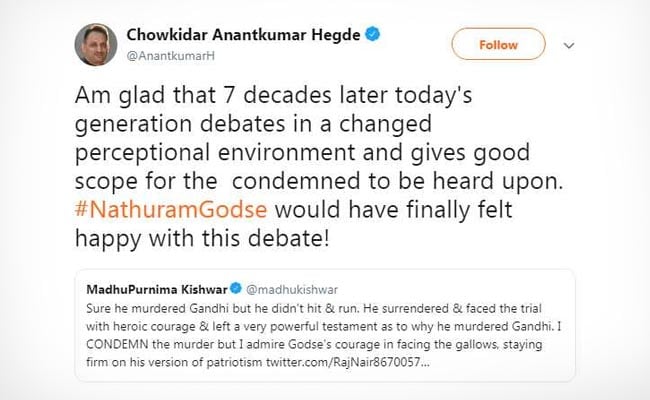 "Godse killed one, Kasab killed 72, Rajiv Gandhi killed 17,000. You judge who is more cruel in this??" - Nalin Kateel tweeted on Thursday, even as Pragya Thakur's comment generated outrage and condemnation.

Rajiv Gandhi was named in the same breath as 26/11 terrorist Ajmal Kasab, who was executed in 2012 for his role in one of the worst terror attacks in India.

The BJP has repeatedly raised Rajiv Gandhi, the father of Congress chief Rahul Gandhi, while targeting the opposition party over the 1984 anti-Sikh riots following Indira Gandhi's assassination by her Sikh bodyguards. Nearly 3,000 were killed in the three-day carnage.

His colleague Anant Kumar Hegde, notorious for controversial remarks, had tweeted: "Am glad that 7 decades later today's generation debates in a changed perceptional environment and gives good scope for the condemned to be heard upon. #NathuramGodse would have finally felt happy with this debate!"

Shortly afterwards, he deleted the tweet and posted: "My Twitter account has been breached twice in the past one week and certain tweets have been posted on my timeline which has been discarded and deleted. Regret the posts attributed to me."

Mr Hegde has often got away with his outrageous remarks but not this time.

On Thursday, Pragya Thakur said: "Nathuram Godse was a deshbhakt (patriot), is a 'deshbhakt' and will remain a 'deshbhakt'. People calling him a terrorist should instead look within, such people will be given a fitting reply in the election."

Despite her party disowning the comment, Pragya Thakur remained defiant and stopped short of an apology twice. "The party's line is my line," she said at first. Then she said the comment was her personal view and expressed regret for hurting sentiment.

She finally apologised on Twitter late last night. "I apologise to the people of the country for my statements on Nathuram Godse. My statement was absolutely wrong. I have huge respect for the father of the nation, Mahatma Gandhi," she tweeted in Hindi.