Yesterday, another actor turned parliamentarian Jaya Bachchan had suggested that the accused in crimes like these be dragged out in public and lynched. 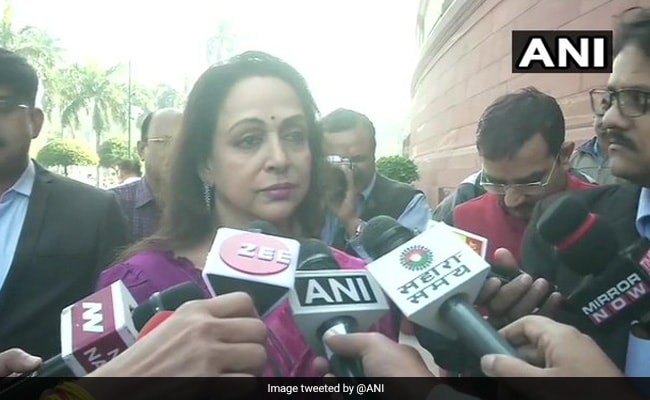 A culprit will inspire others to do the same thing, says BJP MP Hema Malini.

BJP parliamentarian Hema Malini, expressing her anger over the rape and murder of a young veterinarian in Telangana last week, said today that the "culprits should never be released from jail".

"Everyday we are hearing these things happening to women, women being harassed. My suggestion is to keep the culprits in jail permanently, once they are jailed they should not be released at all," Hema Malini told reporters at parliament.

"Whatever decision we take, the culprits should not be out of jail. Because he will again do the same same thing. He has got a devilish mind. He will instigate others. He will inspire others to do the same thing," the actor-politician said.

Yesterday, another actor turned parliamentarian Jaya Bachchan had suggested that the accused in crimes like these be dragged out in public and lynched.

Four men have been arrested after a 26-year-old was raped and murdered in Hyderabad on Wednesday night.

The men, truck-drivers, saw the woman park her scooter near a toll-booth and leave (she went for a dermatology appointment). They allegedly punctured her tyre and waited. When she returned, they pretended to help, gang-raped her, strangled her and burnt her body to destroy evidence, according to the police.

"I don't know how many times I've stood and spoken after this kind of crime. I think it is time... whether Nirbhaya or Kathua or what happened in Telangana... I think the people now want the government to give a proper and definite answer," Jaya Bachchan said in Rajya Sabha, where members expressed shock and rage.

Union Minister Rajnath Singh told the Lok Sabha: "This act has brought shame to the entire country. The accused must be given the most stringent punishment. I don't have words to tell you how horrific these crimes are."