Kirit Somaiya hit out at Mumbai Police Commissioner Sanjay Pandey over the issue and also claimed some "goons" had been sent by Maharashtra Chief Minister Uddhav Thackeray to attack him. 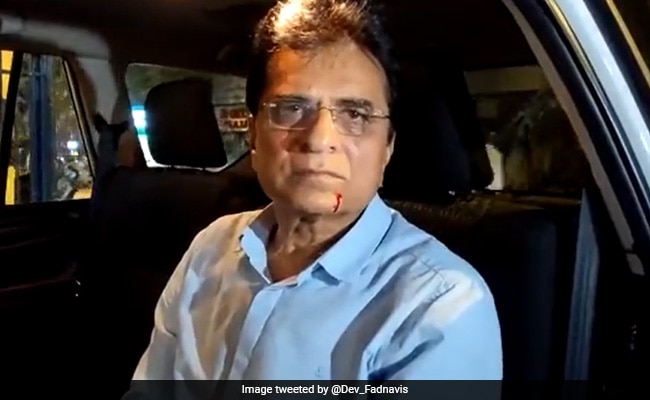 "I am injured, rushing to Bandra police station," said Kirit Somaiya on Saturday.

Former BJP MP Kirit Somaiya on Tuesday claimed that a fake FIR was filed in his name at Khar police station in Mumbai which he had not even signed, days after his car was vandalised while he was returning from the police station after meeting arrested independent MP Navneet Rana and her MLA husband Ravi Rana.

Talking to reporters outside the Khar police station, Mr Somaiya hit out at Mumbai Police Commissioner Sanjay Pandey over the issue and also claimed some "goons" had been sent by Maharashtra Chief Minister Uddhav Thackeray to attack him.

"They should face strict action. It will happen for sure,” the BJP leader said before entering the police station.

“The Mumbai police filed a fake FIR in my name, it is not signed by me. Is Police Commissioner Sanjay Pandey unaware of such legality? I came here to file an actual FIR against the fake FIR filed by the police,” he said.

"It was not signed by me, still it was sent to Khar police station and the officials even initiated action based on it. Is Pandey aware of the legal provision that such an unsigned FIR is illegal?" the BJP leader asked.

"I demand a criminal investigation against the Mumbai police commissioner, who asked (police officials) to get such an FIR registered," Mr Somaiya said.

The BJP leader also said he would meet Maharashtra Governor B S Koshyari on Wednesday and inform him about such practices.

"Today, I demanded an official copy of the FIR. I found that I had not signed it. According to CrPC section 154, my signature should have been there. Are the Mumbai police trying to save Shiv Sena goons?" Mr Somaiya asked.

The BJP leader also claimed that he was made to sit at Khar police station for two hours, but his complaint in the matter was not accepted.

"I was told that my complaint would be accepted and I was made to sit for two hours. After receiving a phone call from the Mumbai police commissioner, Khar police station officials destroyed all the papers and the FIR was not registered," he claimed.

Asked about various allegations, including cheating, levelled against him by leaders of the ruling Maha Vikas Aghadi (MVA) in the state, Mr Somaiya said if he had done anything wrong, the authorities were free to take any action against him.

The Mumbai police late Saturday night registered an FIR against Mr Somaiya's driver for allegedly driving in rash and negligent manner, due to which a Shiv Sena corporator and a party worker suffered minor injuries, an official earlier said.

Some people had vandalised Mr Somaiya's car on Saturday evening when he was returning from Khar police station after meeting independent MP Navneet Rana and her MLA husband Ravi Rana following their arrest.

Amid Shiv Sena's stiff resistance, the Rana couple later cancelled the plan, but the duo was arrested.

Maharashtra Home Minister Dilip Walse Patil had said Somaiya should know that arrested persons can only meet their legal counsel or relatives, and that the BJP leader had no business to go to the police station to meet the Rana couple.