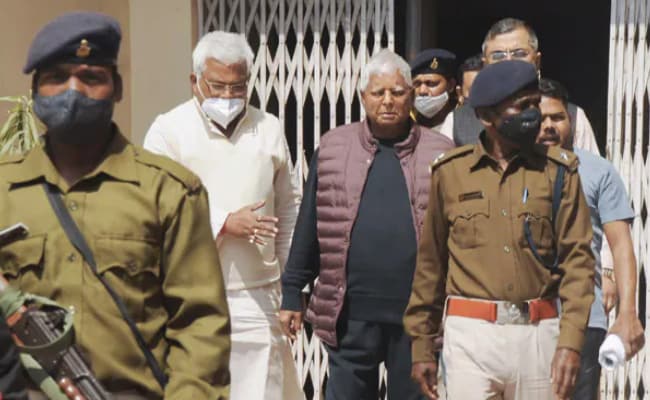 The CBI conducted raids at 17 locations in relation to a new case against Lalu Yadav.(FILE)

Calling Lalu Yadav and his family "a symbol of corruption in Bihar", BJP leader Sushil Modi said that the RJD chief's modus operandi was to lure people seeking jobs in exchange for land.

"The modus operandi was that you give me land and in return, I will give a Group D job in the Railways. Here, the land was first granted in someone else's name and after 5-6 years it was gifted to Yadav and his family (by the said group-D employee)," Sushil Modi alleged.

Mr Modi made these allegations against the Yadav family after the CBI conducted raids at 17 locations in Delhi and Bihar in relation to a freshly registered "land for railway job scam" case against Mr Yadav and his daughter Misa Bharti.

Speaking with ANI on Friday, he further alleged, "Shivanand Tiwari, who is a senior leader of RJD and Lalan Singh, who is the President of JDU, had given a memorandum to the then Prime Minister Manmohan Singh and alleged how Yadav got those lands in exchange for a job."

He said in his book "Lalu Leela" written in 2018, he had mentioned the incident of Hridayanand Choudhary and Lalan Choudhary, where the former is working in a Legislative Council in Bihar and second one was in Railways.

The BJP MP also raised concerns on how can a D-group employee afford to gift properties worth crores.

"We had uncovered more than a dozen cases and I am very happy that the CBI has got the evidence for the case whose Preliminary Enquiry (PE) was registered on 23 September 2021. After registering the PE, when CBI got evidence and related documents I guess that was when the raid started," he added.

"Even the children of Bihar are aware that Kanti Singh and Raghunath Jha had gifted a house to Yadav's family, in return for making him a minister in state and Centre," he alleged.

The senior Bihar BJP leader also claimed that Mr Yadav has 141 land plots and 30 flats, besides being the owner of half a dozen houses, whose proof is also available in this book (Lalu Leela).

"I want to know how can a person born in a peon's family can become the owner of this much of assets in just 25 years?" he continued.

The MP also raised questions about the properties and wealth of Tejashwi Yadav.