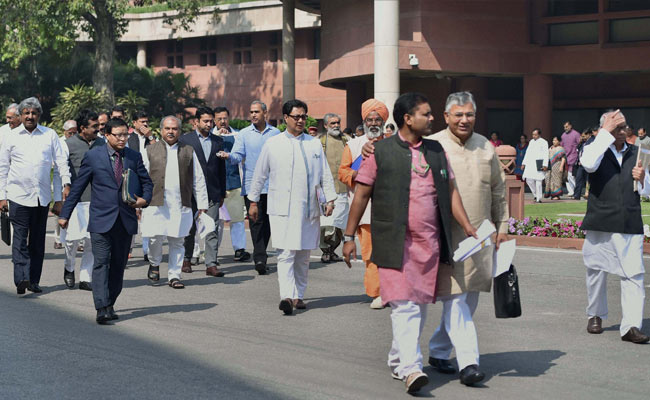 BJP MPs after the BJP parliamentary board meeting at Parliament House in New Delhi on 17 March, 2015. (Press Trust of India)

About 25 BJP MPs including Union Minister Babul Suprio and Shatrughan Sinha, Varun Gandhi and Poonam Mahajan yesterday suffered the embarrassment of being named and asked to stand at a Parliamentary Party meeting for their absence during voting in the Lok Sabha on crucial bills last week.

Party sources said they were reprimanded when Parliamentary Affairs Minister M Venkaiah Naidu read out names of the erring MPs who were absent during voting in Lok Sabha when the crucial land acquisition bill was passed.

Among others who were absent during that voting were Pritam Munde, daughter of former Union Minister Gopinath Munde, Riti Pathak (Madhya Pradesh) and Chandra Prakash Joshi (Rajasthan).

Sources said while in two cases MPs were absent due to a bereavement in their family and a wedding (in the case of Rajendra Agrawal-Meerut), others failed to provide enough reasons.

Promoted
Listen to the latest songs, only on JioSaavn.com
Mr Naidu cautioned all the erring MPs over their absence and directed them to be present in their respective Houses as the BJP has already issued a whip for this week.

BJP wants the presence of all its Parliamentarians in both Lok Sabha and Rajya Sabha to ensure passage of some key legislations seeking to replace ordinances and save the ruling party from any embarrassment in case a bill fails due to lack of numbers despite commanding majority of the ruling coalition in the Lok Sabha particularly.
Comments
M Venkaiah NaiduBJP Parliamentary boardBJP Parliamentary Party meetVarun GandhiShatrughan SinhaPritam MundeBabul SupriyoLok Sabha