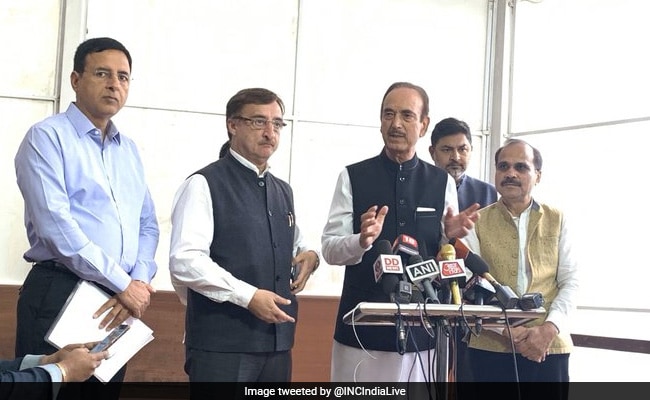 "The BJP is trying to finish democracy by destabilising state governments one by one," Congress said.

The Congress, rattled over missing MLAs that could threaten its wafer-thin majority in Madhya Pradesh, today accused the BJP of "kidnapping 14 MLAs" to destabilise its government in what it called "Operation Holi".

Four MLAs - Congress's Hardeep Dang, Raghuraj Kansana and Bisahulal Singh and Independent member Shera Bhaiya - are rumoured to be at a five-star hotel in BJP-ruled Karnataka, which, last year, saw the Janata Dal Secular-Congress government crashing after 15 rebels crossed over to the BJP.

Reports emerged on Tuesday evening of some MLAs supporting the Madhya Pradesh Congress government of Kamal Nath camping at a five-star hotel in Gurgaon near Delhi. Senior Congress leader Digvijaya Singh alleged that the BJP was trying to bribe MLAs of his party by "offering Rs 25-35 crore".

The Congress complained that its senior party leaders trying to speak to the MLAs were not allowed into the hotel in BJP-ruled Haryana by the police.

Around 2 am on Wednesday, one MLA, Ramabai, came out of ITC Grand Bharat with her bags, escorted by Congress ministers including Digvijaya Singh's son. Rambai is a suspended MLA of Mayawati's BSP. The Congress called it a rescue but the MLA did not endorse it.

"14 MLAs were kidnapped. The Congress government stopped mafias - land mafia, chit fund mafia, extortion mafia... These had been going on for 15 years. They thought they will be behind bars, that is why a conspiracy has been designed to destabilise the Madhya Pradesh government," said Congress spokesperson Randeep Surjewala.

"Will Amit Shah, Shivraj Chouhan and ML Khattar please tell who took the 12 MLAs to Manesar (Gurgaon) in a special chartered plane?"

Another Congress leader, Ghulam Nabi Azad, said, "From Kashmir to Andhra Pradesh and from Goa to Bengaluru, this has been their policy, that no other political party should make the government and wherever there are governments of other parties, they are 24x7 invested in destabilizing the government." He added that the "fever arose around Rajya Sabha polls" so that the BJP could win more seats in the house where it is in a minority.

A prominent Madhya Pradesh BJP leader, Narottam Mishra, rejected the allegations. "They should think why people are so angry that they don't want to stay with them," he said, questioning why the MLA Ramabai had said nothing.

Ramabai denied Congress allegations that she and the others were flown to Delhi by chartered flight. She also made it clear that she was with Chief Minister Kamal Nath. "There is no threat to the state government. If he wants to make me a minister, I will," she said.

The Kamal Nath government has 120 MLAs, four over the majority mark of 116 in the 230-member assembly. Out of these, 114 are from the Congress, two from the BSP, one from the Samajwadi Party and four independents. If four members go, the government will be left with 116. The BJP has a strength of 107 MLAs. Two seats in the assembly are vacant.