Lalu Prasad, who has been in Delhi since his release from jail a few months ago, also expressed "strong condemnation" for the incidents in Lakhimpur Kheri district of BJP-ruled Uttar Pradesh, 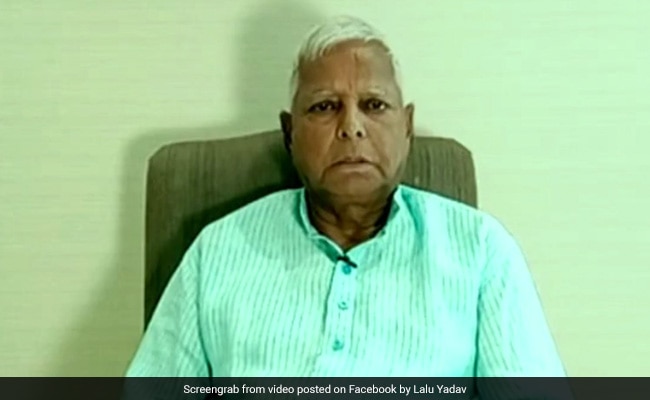 Rashtriya Janata Dal president Lalu Prasad on Tuesday launched a vitriolic attack on the BJP and likened it to a beast that has "tasted blood".

Addressing party workers in Patna through video conferencing, Mr Prasad, who has been in Delhi since his release from jail a few months ago, also expressed "strong condemnation" for the incidents in Lakhimpur Kheri district of BJP-ruled Uttar Pradesh, where a car allegedly belonging to son of a Union minister ploughed into a crowd of agitating farmers.

The former Union minister, who had been an MP for many terms before getting barred from contesting elections in 2013, also lamented the lack of unity in the opposition and asserted that the BJP could be defeated if all parties opposed to it could keep their flock together.

Mr Prasad, who had to step down as the Bihar Chief Minister in 1997 because of the charge-sheet filed against him the fodder scam, also predicted an "early fall" of the Nitish Kumar government, which returned to power in the assembly elections last year.

The outspoken OBC leader, a mascot of pro-Mandal politics, also expressed outrage over the Centre submitting before the Supreme Court that it would not be able to enumerate the numerically powerful social group despite Prime Minister Narendra Modi having hinted otherwise during a meeting with an all-party delegation from Bihar, headed by Mr Kumar and including Mr Prasad's son and heir apparent Tejashwi Yadav.

He claimed that the BJP has looked down upon affirmative action and declared, "We will fight and see to it that caste census is undertaken and policies are formulated taking population of different castes into account".

The septuagenarian also appeared to place a lid on the controversy triggered by the declamation of his elder son Tej Pratap Yadav that the RJD supremo was being "held captive in Delhi and prevented from visiting Bihar", remarks which were seen as the mercurial leader's outbursts aimed at his younger, but more powerful, sibling Tejashwi.

Mr Prasad told the gathering in Patna, where Tejashwi was present, "I will soon come to Bihar. Almost every day I keep asking my doctor here when can I go. I suffer from a serious kidney problem and have been advised to keep my daily intake of water limited to one litre. But my health is improving and I look forward to being with you soon".

"The country is reeling under joblessness and soaring prices. But the BJP has no interest in resolving these problems. It has tasted blood, (munh khoon lag gaya hai) having come to power by pitting the followers of Ram and Rahim against each other," said Mr Prasad.

He also reaffirmed his commitment to secularism, reminding the people of the arrest of BJP leader LK Advani when the Ram Rath Yatra was crossing through the state.

Mr Prasad, whose party recently snubbed the Congress, its ally in Bihar, by fielding its candidates from both by-poll bound assembly seats despite the latter wishing to contest one of these, also made a snide remark about the "high command culture" prevailing in the national party contrasting it with his style of functioning.

"During elections, candidates of other parties including Congress used to wait for clearance from high command for their tickets getting finalised. I used to put my signature sitting under a tree," said the RJD supremo, known for his earthy mannerisms.

He also gave the audience a taste of his trademark humour, adored and abhorred by different sets of people in equal measure, when he recounted his patronage to Bhola Ram Toofani, a Dalit leader from humble origins, whom he had made a minister and lent his helicopter for making a round of his constituency.

Taking potshots at Nitish Kumar, his arch rival, Mr Prasad recalled the former's vehement demand for special category status to the state and wondered why he was with the BJP which had shown its disregard for the long pending request.

"Our party did very well under Tejashwi's leadership in the assembly polls. It emerged as the single largest party though the NDA got majority by manipulation of results in tightly contested seats....... There is not much cohesion in the ruling alliance in the state. I am telling you, this government will fall much before completion of its term," said Mr Prasad, who spoke for nearly half-an-hour.