The BJP's attempts to consolidate its flock during the crisis proved to be non-starters because of Vasundhara Raje's silence and perceived refusal to "seize the moment" in an intense race for numbers. 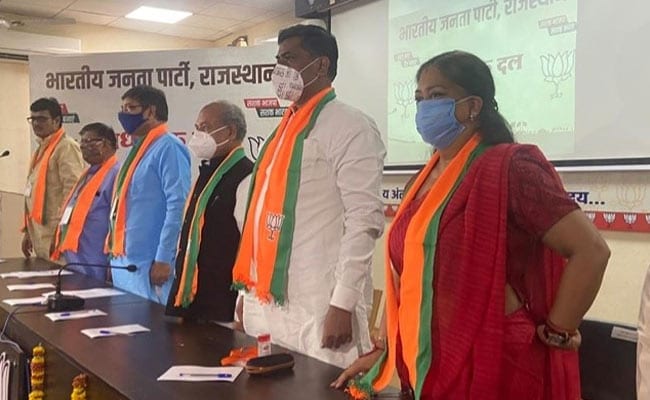 Vasundhara Raje and other top Rajasthan BJP leaders are meeting today to plan for the special session of the state assembly from tomorrow. This is the first meeting of BJP MLAs since the Congress rebel crisis broke out early July, pushing the Ashok Gehlot government to the verge of collapse until Sachin Pilot ended his rebellion on Monday.

The BJP's attempts to consolidate its flock during the crisis proved to be non-starters because of Vasundhara Raje's silence and perceived refusal to "seize the moment" in an intense race for numbers.

A meeting called just after Mr Pilot's revolt had to be cancelled as Vasundhara Raje reportedly had no plans to attend. Sources say without the former Chief Minister's cooperation, the BJP could do very little.

The revolt by Sachin Pilot and 18 other rebels had left Chief Minister Ashok Gehlot with 102 MLAs, barely one above the majority mark in the 200-member Rajasthan assembly.

The BJP has 72 MLAs and needs 30 more to take power. The rebel camp claimed the backing of 30 but officially, that number was stuck at 19.

When Sachin Pilot met with Rahul Gandhi and Priyanka Gandhi Vadra on Monday after a month of acrimony and tough-talking, there was speculation that he was forced to call a truce as the BJP backed off because he couldn't reel in more MLAs to his side.

The BJP cancelled its previous MLAs' meet scheduled on Tuesday after the Congress patch-up.

Vasundhara Raje had also dropped out of the meeting. "Vasundhara ji's gardener has tested Covid-19 positive. She also got herself tested, I don't know the result," Mr Kataria said. The BJP's Rajasthan chief Satish Poonia claimed the legislature party meeting was cancelled because of the Janmashtami festival.