The video, on a Marathi TV channel, shows Narendra Mehta and others from the Mira Bhayandar Municipal Corporation celebrating Anand Manjrekar's birthday. 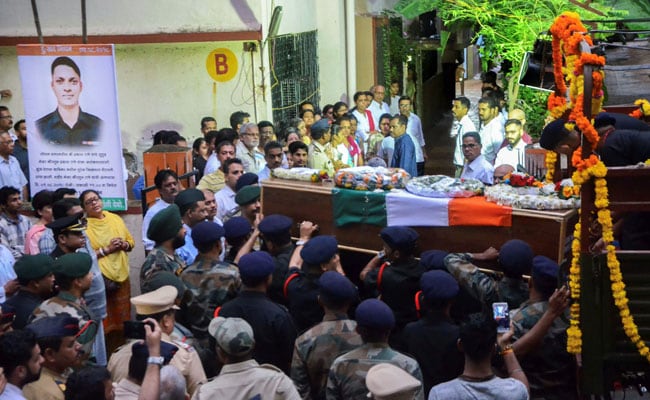 The BJP was left red-faced after a video, showing its legislator and corporators attending a birthday party in adjoining Mira Road township, went viral, at a time when people were expecting the body of Major Kaustubh Rane, who attained martyrdom in Kashmir.

The video, telecast by a Marathi TV channel, shows BJP legislator Narendra Mehta and a dozen BJP corporators from the Mira Bhayandar Municipal Corporation celebrating the birthday of Anand Manjrekar in the township on Tuesday night.

The celebrations took place a day before the body of Major Rane, who was killed in Jammu and Kashmir during an operation to foil an infiltration bid, reached Mumbai.

Mr Mehta was quick to tender an apology on the incident. "What happened (the birthday bash) is extremely unfortunate. It shouldn't have happened," he said.

"All of us have expressed regret for it. This is not a political issue," he told the channel.

Asked why the bash was not cancelled despite the entire township mourning the martyrdom of its resident, Mr Mehta said the event was pre-planned.

In an interview with PTI, NCP spokesperson Nawab Malik said, "This is the height of shamelessness on part of BJP public representatives. This incident has exposed the true face of BJP. The legislator and corporators who attended the party should be expelled by the party."

"Those attending the party have given a flimsy excuse that they were not aware of Major's death. But the reality is some of them had gone to his residence earlier to offer their condolences and from there they had straightway headed to the party venue," he said.