With the private bus service on Jammu-Pathankot highway remaining suspended for the third day on Wednesday in protest against the newly set up toll plaza at Sarore in Samba district, the Congress party also held a demonstration near the plaza. 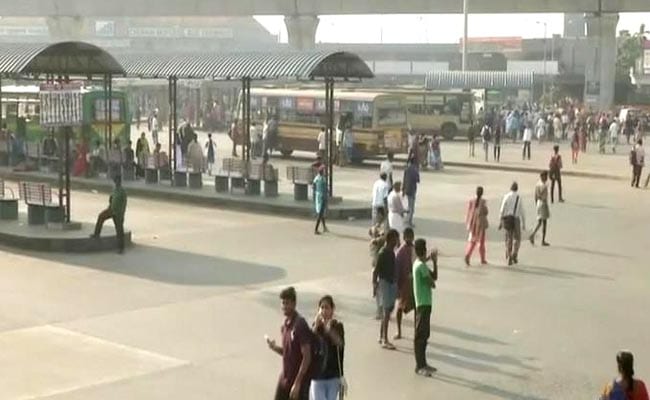 The Congress party also held a demonstration near the newly set up toll plaza.

The Congress on Wednesday lent its support to the agitation against collection of road tax at Sarore toll plaza on Jammu-Pathankot national highway, saying the BJP has imposed a ''jazia'' in garb of road tariff.

The Congress party also held a demonstration near the newly set up toll plaza as the private bus service on Jammu-Pathankot highway remained suspended for the third day.

The congress sought immediate abolition of the tariff even as the NHAI defended its decision and sought to assure people of hassle-free movement of vehicles.

The transporters also staged demonstrations at different places for the second day, threatening a ''chakka jam'' in the entire Jammu if their demand was not met immediately.

Speaking to reporters, Mr Bhalla said the toll plaza on the highway has been set up by the government of the same party which opposed the same a few years back terming it a ''jazia'' on pilgrims.

“It was abandoned by the UPA Government on public demand but now no one listens the voice of common people in the new model of democracy. Is it not a ''jazia'', besides being unjust now?” questioned Mr Bhalla, asserting that it exposes the BJP's duplicity.

While holding ply cards and raising slogans against the BJP and the NHAI, the protesters accused the BJP of imposing road tax on people to further loot them amid the ongoing inflation and economic crisis.

Mr Bhalla said the BJP government at the Centre first imposed heavy traffic penalties on the people by amending the Motor Vehicle Act and it is now forcibly installing toll plazas in Jammu region.

He said the government was testing waters before installing two more toll plazas in vicinity of Jammu at Rajbagh and on ring road.

These entry-exit points would not only break the back of the people with hefty taxes but deeply hurt the religious faith of the Hindus all over the country who visit Mata Vaishno Devi shrine to pay their holy obeisance, said Mr Bhalla.

The government should find other ways to generate revenue rather than taxing poor people, he said.

By installing the toll plaza at Sarore, the BJP has belied the mandate of Jammu region, Mr Bhalla added.

Bhalla urged Governor Satya Pal Malik to withdraw "such anti-people" measures at the earliest, failing which, he said, the Congress would come on road in support of the people.

He demanded the scrapping of all plans to set up toll plazas in Jammu to ensure progress and economic development of the state, which, he said, is totally dependent on tourism.

The toll plaza at Sarore was inaugurated by National Highway Authority of India (NHAI) on October 11, drawing a strong reaction from all sections of the society and political parties including the BJP which had written a two-page letter to the Union Transport Ministry seeking its abolishment.