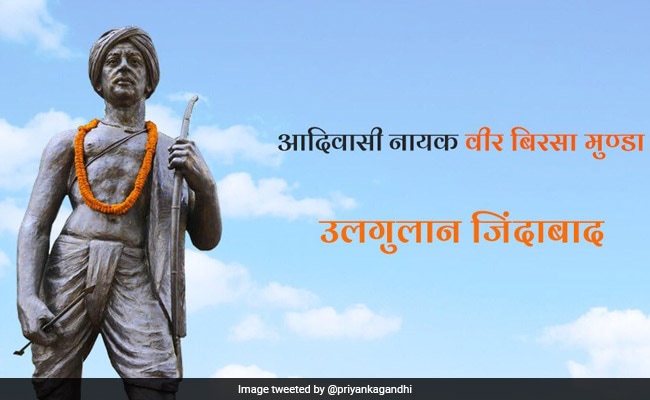 Birsa Munda, the tribal revolutionary of the British era, was born on November 15, 1875. His birth anniversary is celebrated as Birsa Munda Jayanti in the country and coincides with the Jharkhand Foundation Day. Jharkhand was established in Birsa Munda Jayanti in the year 2000. Birsa Munda, who belonged to the tribal group Munda, began the tribal movement in Bengal residency (now Jharkhand). On his birth anniversary, Prime Minister Narendra Modi, President Ram Nath Kovind, Vice President Venkaiah Naidu and other leaders paid tribute the revolutionary leader who famously called 'Dharti Aba', the father of earth.

"Jharkhand is synonymous with bravery and compassion. The people of this land have always lived in harmony with nature. They have excelled in various fields thanks to their hard work. May Jharkhand keep scaling new heights of progress and realise Bhagwan Birsa Munda's dream of a prosperous and happy state," the Prime Minister tweeted.

President Ram Nath Kovind, wrote in Hindi, "Johar Jharkhand! Congratulations and best wishes to the people of Jharkhand on the occasion of the state''s Foundation Day."

"Jharkhand is a state with rich natural resources and rich culture, which we are all proud of. I wish Jharkhand attains new heights of progress with the blessings of Lord Birsa Munda," he said.

"I congratulate the people of #Jharkhand on the occasion of the state formation day. With its rich culture and abundant natural resources, Jharkhand has always had a unique place in India. My best wishes to the state for a prosperous future," Vice President Venkaiah Naidu said.

Congress leader Priyanka Gandhi recalled him for his fight against the British and as a leader who struggled for water, forest, land and identity of the tribals.

"You said that tribals would take decisions themselves on issues related to water, forest, and land. Tribute to the tribal leader and great freedom fighter Bhagwan Birsa Munda on his birth anniversary," she wrote on Twitter.

Birsa Munda died at an early age of 24, but left a great impact by firing the imagination of the tribals. by mobilising them against the tyrant British rulers. He had raised the slogan Abua raj seter jana, maharani raj tundu jana which means "Let the kingdom of the queen be ended and our kingdom be established". This slogan threatening the British Raj became widely popular.

Birsa Munda was arrested on March 3, 1900 in Jamkopai forest in Jharkhand while he was sleeping along his tribal guerrilla army which was fighting against the British. Birsa Munda died in Ranchi jail on June 9, 1900. Although the British claimed he died of cholera, he reportedly never showed symptoms. The jail in which he died is now named after him. On Birsa Munda Jayanti, Twitter also saw a huge outpour of tributes for the freedom fighter, with #DhartiAaaba_BirsaMunda in Hindi being the top trend.