Many bike riders decided to change their route and head towards Ladakh via Bhaderwah-Padri area of Doda district passing through the Chamba area of Himachal Pradesh. 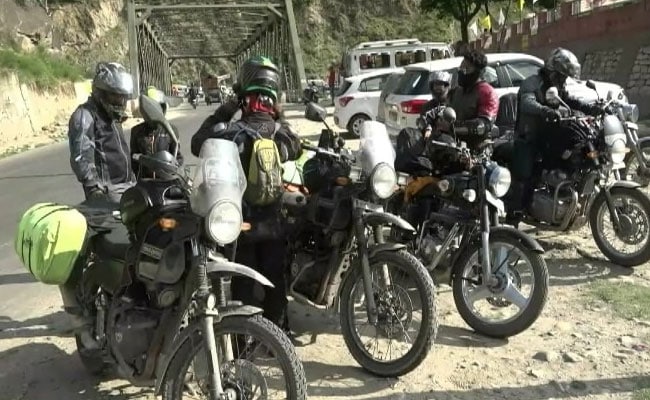 Bikers going to Ladakh said they were unaware about any restriction to enter Kashmir valley.

Bikers going to Ladakh for a leisure trip were stopped from proceeding towards Kashmir valley on Sunday, two days after the Jammu and Kashmir government advised the tourists and Amarnath pilgrims to leave the valley "immediately" because of intelligence about terror threats.

The riders had to return from Jawahar tunnel in Ramban district after they were denied entry into Srinagar by the police forces deployed there.

"I was not aware of any restriction like this and was stopped while entering Srinagar in the Ramban district. At first, we thought it might be temporary. But now we have rescheduled our trip and we have to change our plans," said Tanmay,a biker from the group.

"All of us are office-goers after so long we planned but now we have to change our plans," he added.

Many bike riders decided to change their route and head towards Ladakh via Bhaderwah-Padri area of Doda district passing through the Chamba area of Himachal Pradesh.

Sources have told NDTV that multiple attempts were made by terrorists to infiltrate into India by crossing the Line of Control between July 29 and July 31.

The Army on Friday said there are confirmed intelligence reports that terrorists backed by the Pakistan Army are trying to disrupt the Amarnath Yatra, revealing that a landmine and a sniper rifle were found on the route of the pilgrimage, around 140 km from Srinagar.

Following this, an unprecedented advisory was issued asking pilgrims and tourists to "curtail their stay" and "return as soon as possible".

The announcement also triggered panic among the locals. Long queues were seen outside shops, pharmacies and ATMs as people rushed to stock up essentials.

Scores of anxious tourists and pilgrims, many without tickets for flights, scrambled to the Srinagar airport to leave the Valley. Amid the rush, the Ministry of Civil Aviation intervened and asked airlines to rein in the surging airfares.

Over the last week, there has been huge security build-up in the state, with the centre pushing in more than 35,000 paramilitary troops.

The last time Kashmir saw such heavy presence of troops was after the Pulwama terror attack in February, in which 40 Central Reserve Police Force soldiers were killed by a suicide bomber of the Jaish-e-Mohammad.