Bihar Rain: Bihar Deputy Chief Minister Sushil Modi and his family were seen being taken in an orange, inflatable rubber boat along with other people.

Bihar Rain: Sushil Modi was seen being taken in an orange boat along with other people.

Bihar Deputy Chief Minister Sushil Modi and his family were among hundreds of people in Patna who were stranded in their homes after the city was pounded by rain, the heaviest in two decades. Mr Modi was seen being taken in an orange, inflatable rubber boat along with other people.

Heavy rain killed 27 people in Bihar as flood waters swamped the capital city, home to around 2 million, and several other districts over the last three days.

The Deputy Chief Minister was in a pair of shorts, a grey polo-neck t-shirt and Crocs when he was moved out by the National and State Disaster Response Forces personnel. After getting out of the boat, he gave instructions to policemen and other officials.

He and his wife were seen standing behind an ambulance with bags next to them.

Private hospitals, medical stores and other shops in Patna were submerged in waist-deep water. Visuals showed flooding at Nalanda Medical College Hospital, the second largest healthcare facility in the city. 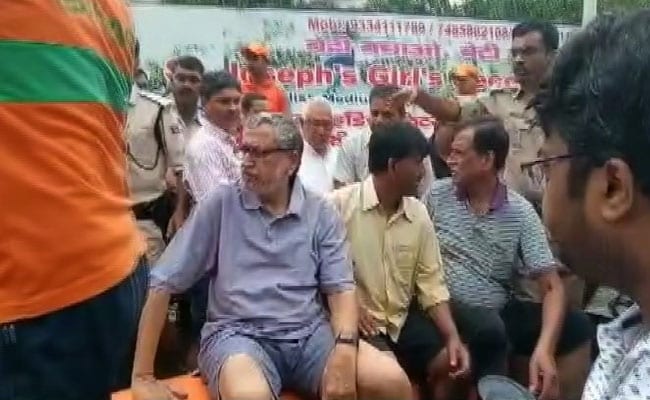 Sushil Modi was seen in a pair of shorts, a grey polo-neck t-shirt and Crocs when he was moved out.

A bird's eye view of Patna made the city appear like a huge lake dotted with concrete structures. Posh low-lying areas like Rajendra Nagar and Pataliputra Colony were flooded.
"The rains have stopped but there is waterlogging in many areas," Bihar's Additional Secretary in the Disaster Relief Department Amod Kumar Sharan said.

The weather office, however, has warned of more rain in the 24 districts in state in the next 24 hours. Schools in Patna are closed till Tuesday.