Nitish Kumar And Tejashwi Yadav's Agreement: Who Gets What

Sources say Nitish Kumar will be Chief Minister with Tejashwi Yadav as his Deputy. 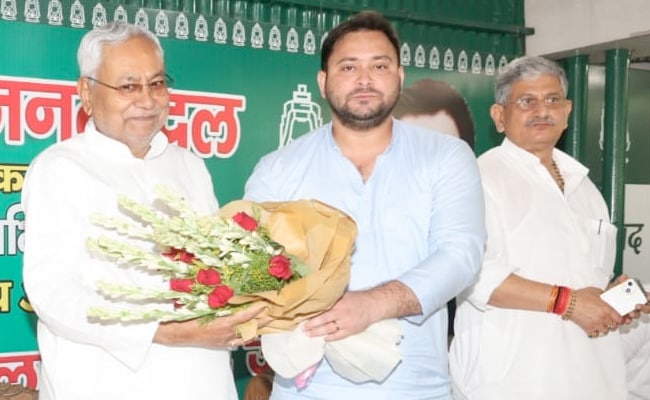 The Speaker will be selected from Tejashwi Yadav's party, the RJD, source said.

As they get ready to form a new government together, Nitish Kumar, who resigned as Chief Minister of the current Bihar government, and Tejashwi Yadav, the 32-year-old Opposition leader, have worked out the broad contours of their understanding. Sources explained these as:

Nitish Kumar will be Chief Minister with Tejashwi Yadav as his Deputy;

The assignment of all ministries will be Nitish Kumar's prerogative;

The Speaker will be selected from Tejashwi Yadav's party, the Rashtriya Janata Dal or RJD;

Much of this depends on the Governor's actions - he met with Nitish Kumar this evening; Tejashwi Yadav too attended the meeting. Other Opposition parties like the Left and the Congress will participate in the new government led by Nitish Kumar.

This morning, Nitish Kumar called it quits with the BJP at a meeting of his legislators after accusing the Prime Minister's party of working to split the Janata Dal United; in parallel, Tejashwi Yadav met with his MLAs to formally agree on reuniting with Nitish Kumar.

In 2015, Nitish Kumar ended a long alliance with the BJP to form the government with Tejashwi Yadav's party and the Congress. In 2017, he pole vaulted back to the BJP after accusing Tejashwi Yadav of being a corrupt minister. But the revived collaboration with the BJP was a bitter one, with both sides publicly criticizing each other over matters both large and small.

But the crisis reached "it's over" stage after Nitish Kumar's team accused RCP Singh of corruption. At one time, RCP Singh was the president of Nitish Kumar's party. He was chosen in 2019 to serve as the sole minister in the PM's Cabinet. At the time, Nitish Kumar was furious over being allocated just one ministry, but he reluctantly accepted it. Now his party says that RCP Singh claimed that he alone was acceptable to top BJP leader Amit Shah. Team Nitish cites this as proof that Amit Shah used RCP Singh to plot against the Chief Minister in a repeat of what happened in Maharashtra- the BJP coopted Eknath Shinde of the Shiv Sena to split the party so successfully that Uddhav Thackeray had to quit and is now in danger of losing control of the party founded by his father. Nitish Kumar feels this has become the BJP's charter for handling allies- diminish them from within, then oust them to establish the BJP as the dominant if not sole party in a region.

Maharashtra proved this is not a conspiracy theory, say Nitish Kumar's aides. They point also to a recent remark by BJP President JP Nadda: "Other parties will not make it, only the BJP will exist." The mission has been publicly stated, they claim.