Jitan Ram Manjhi shared a news report of a Dalit couple in Karnataka being penalized after their two-year-old child inadvertently stepped into a temple. 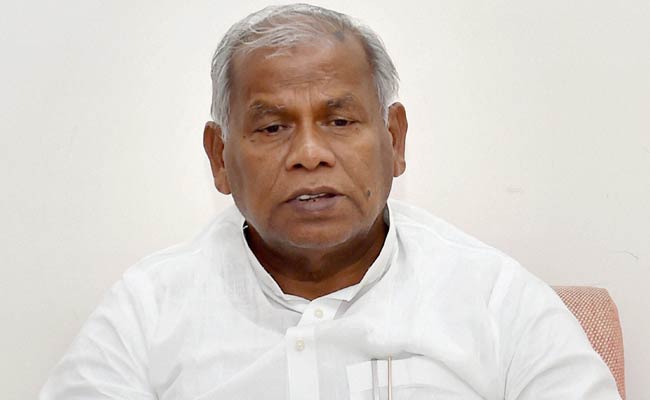 Jitan Ram Manjhi said he is giving voice to the pain that has been experienced for centuries.

Former Bihar Chief Minister Jitan Ram Manjhi on Thursday lashed out at “dharm ke thekedaar” –self-appointed guardians of faith – whom he squarely blamed for Dalits being deprived of a life of dignity.

Mr Manjhi, whose Hindustani Awam Morcha is a part of the ruling alliance in the state, expressed his anguish on his Twitter handle, sharing a heart-wrenching news report of a Dalit couple in Karnataka being penalized after their two-year-old child inadvertently stepped into a temple.

Incidentally, Karnataka is ruled by the BJP, which is also the largest partner in the ruling coalition in Bihar.

“I am giving voice to the pain that has been experienced for centuries. So far, I have been shy of expressing the anguish. Now nobody will say a word. The dharm ke thekedaar go silent on such matters...... they cannot brook Dalits entering the temples or offering their views on religious works (dharmik kavya),” Mr Manjhi tweeted.

For the politically savvy citizens of the state, which Mr Manjhi ruled for a little less than a year, the context was hard to miss.

His outcry came close on the heels of a barrage of insults from the BJP after he made a statement suggesting that he believed Lord Ram was a fictional and not historical figure.

The controversy had erupted a couple of days ago when his views were sought about demands by BJP leaders here that Ramayana be included in school syllabus, following a similar move by the saffron party's government in Madhya Pradesh.

Mr Manjhi had said he was very much in favour of the epic being taught in schools though he was of the view that “Lord Ram was not a man who lived on this earth at any point of time”.

This evoked predictable outrage from the BJP, which owes its rise, in no small measure, to the Ram Janmabhoomi movement in Ayodhya.

Several BJP leaders came out with statements berating Mr Manjhi. Its MLA Hari Bhushan Thakur, who is fast emerging as an outspoken hardliner, went to the extent of asking why the former CM, a septuagenarian and more than 20 years his senior, “was named Jitan Ram Manjhi and not Jitan Rakshas (demon) Manjhi”.

Mr Manjhi, whose political career spans over several decades, chose not to reply to the vituperation but stuck to his guns on Wednesday when he reiterated, “I do not believe Lord Rama was a great man. He is a work of fiction. I believe Valmiki and Goswami Tulsidas were great men who came out with such an inspiring character.”

Ironically, it was the BJP to which Mr Manjhi owed his rise as an independent Dalit leader in Bihar.

He became the Chief Minister in 2014 when his political mentor Nitish Kumar stepped down and parted ways with the latter when he was asked to step down several months later.

The BJP, which was then sore over Nitish Kumar snapping ties with it, had backed Mr Manjhi to the hilt when he broke away from the JD(U) and floated his own party. Prime Minister Narendra Modi's infamous “DNA” jibe at Mr Kumar was also made in the context of unceremonious removal of Mr Manjhi, a “Mahadalit”.

After remaining with the NDA for some time, Mr Manjhi quit the BJP-led alliance in 2018 when he was promptly rewarded by the opposition RJD with a berth in the legislative council for his son.

Shifting sands of politics have led Mr Manjhi to realign with Mr Kumar, with his son as a member of the cabinet.