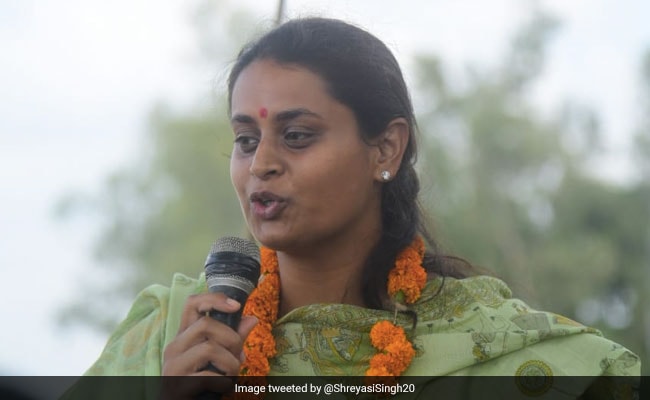 Shreyasi Singh, a Commonwealth Games gold medal-winning shooter, is a BJP candidate in the Bihar assembly election. The 30-year-old entered politics only recently and joined the BJP earlier this month.

She is the daughter of former union minister and Lok Sabha MP, Digvijay Singh, who died in 2010. In Jamui, she is pitted against ex-Bihar minister Vijay Prakash Yadav of Lalu Prasad Yadav's RJD, the sitting MLA whose elder brother Jaiprakash Narayan Yadav is a former union minister and a close aide of party supremo Lalu Prasad.

During her election campaign, Ms Singh said she wants to become the face of Prime Minister Narendra Modi's "Aatmanirbhar" (self-reliant) India initiative and work towards creating job opportunities in Bihar so that people in the state do not have to move outside the state to earn a livelihood.

A graduate of Delhi University's Hansraj College, Ms Singh had represented India in two events at the 2010 Delhi Commonwealth Games but failed to win a single medal.

She won the individual silver medal in double trap in Glasgow and followed that by winning a bronze medal at the 2014 Asian Games in Incheon. The Arjuna Awardee won a shooting gold medal in the 2018 Commonwealth Games in Australia.

Ms Singh plans to continue with her sports career along with politics. "That is the reason I have chosen to contest assembly polls rather than Lok Sabha polls. An assembly constituency is smaller than a Lok Sabha constituency. Winning an Olympic gold is still my dream," she told news agency PTI-Bhasha.