Shreyasi Singh, who is the daughter of former union minister late Digvijay Singh and a reigning national champion in the double trap event, has been fielded by the BJP from Jamui seat. 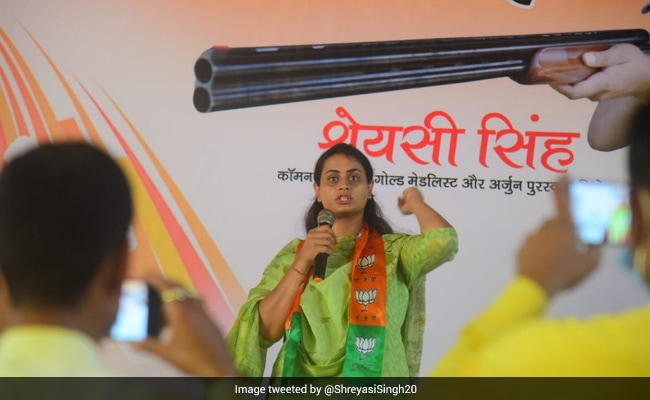 Shreyasi Singh has been fielded by the BJP from Jamui seat.

The 29-year-old also said she wants to become the face of Prime Minister Narendra Modi's "Aatmanirbhar" (self-reliant) India initiative and work towards creating employment opportunities in Bihar so that people are not forced to go outside to earn a livelihood.

She said joining politics doesn't mean she would quit sports.

Ms Singh said she would continue the two simultaneously.

"That is the reason I have chosen to contest assembly polls rather than Lok Sabha polls. An assembly constituency is smaller than a Lok Sabha constituency. Winning an Olympic gold is still my dream," she told PTI-Bhasha in an interview.

The shooter, who is the daughter of former union minister late Digvijay Singh and a reigning national champion in the double trap event, has been fielded by the BJP from Jamui seat.

Voting on the seat, which falls in the Jamui Lok Sabha constituency of LJP president Chirag Paswan, will be held in the first phase on October 28.

"Arts, sports and culture will be my priority. There is no dearth of talent in the state. My work will be to provide them the stage," Ms Singh, a graduated from Hansraj College of Delhi University, said.

She said that to make sports competitive and professional in Bihar, she wants to establish a sports authority at Jamui with the help of the state government and on the lines of Madhya Pradesh.

She said her planned sports authority will provide future sportspersons not only training but their food, lodging and studies will also be taken care of with the state government funds.

The Arjuna Awardee had won a shooting gold medal in the 2018 Commonwealth Games in Gold Coast.

She said politics should not be pursued on the lines of caste and religion.

"There should be politics of development. That also should not just be about basic infrastructure but overall development," Ms Singh said.

She said industries should be developed in remote areas as well as in all parts of the state so that there is employment opportunity.

"Why should Biharis leave Bihar and live like a second class citizens in other places? This is not right. Why can't we create job opportunities in Bihar so that our people can lead a life with dignity with their family?" she said.

She said she wants to develop Jamui as an ideal constituency and show what an MLA can do for his or her area.

"I want to become the face of the Prime Ministe's Aatmanirbhar Bharat initiative. For that, I want to contribute towards a self-reliant Bihar and stop migration of people for jobs. And I want to start that from Jamui," Ms Singh, whose mother Putul Singh has been an MP from BJP from Banka in the past, said.

Listing the issues and problems of Jamui, she said agriculture and irrigation are the primary areas of concern for the region and several central and state schemes were designed to work on these.

"Some policies are still on paper and my effort will be to take them to people," she said.

She said literacy among the female population has increased but as has their dropout rate and she would try to fix this by ensuring girls have opportunity for higher education.

Ms Singh said she wants to fulfill some of her fathers dreams.

Digvijay Singh had served as Union Minister under VP Singh as well as in Chandrasekhar ministry.

He was minister of state for Railways in the NDA government of Atal Bihari Vajpayee from Samata Party which was then headed by George Fernandes.

She said she also wants to promote tourism in the area and develop Jatayu Giddheshwar Temple and places associated with the 24th Jain tirthankara lord Mahavira.

Asked if she was offered tickets by several parties, she said she does not have any personal enmity or grudge against any individual or party.

She also thanked LJP president Chirag Paswan for appealing to people to vote for her.