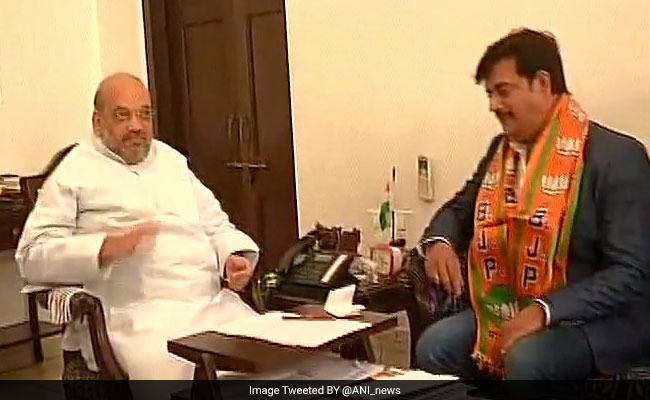 Ravi Kishan was a Congress candidate from Jaunpur in the 2014 Lok Sabha elections.

New Delhi: Bhojpuri actor Ravi Kishan was formally inducted into the BJP on Sunday around 10 am by party president Amit Shah in the presence of fellow actor and MP Manoj Tiwari in New Delhi. Mr Tiwari, who is also the chief of the BJP's Delhi unit had broken the news of Mr Kishan's decision to join the party on Twitter.

Interestingly, the 43-year-old actor was a Congress candidate in the 2014 Lok Sabha elections from his home constituency of Jaunpur in Uttar Pradesh. His performance was dismal as he secured only 42,759 votes or 4.25 per cent of the total votes.

Mr Kishan had, then, said that he would continue his acting career despite his new political innings.

"I will never stop acting... I think I can strike a balance in politics and acting," the actor said.

Promoted
Listen to the latest songs, only on JioSaavn.com
"I chose Congress as I have been campaigning for them for the last decade. I am a Gandhian and a big fan of the late Rajiv Gandhi. Priyanka and Rahul are young and can connect with the youth today," he had said.

Mr Kishan has delivered many superhit movies in Bhojpuri such as Pandit Ji Batai Na Biyah Kab Hoi, Raavan, Banke Bihari MLA among others. He has also acted in many Hindi, Marathi and Telugu movies. He has also participated in many reality shows such as 'Bigg Boss' and Jhalak Dikhla Jaa. Mr Kishan also voiced Tobey McGuire's character in the Bhojpuri dub of 'Spider-Man 3, which was the first ever Hollywood film to get a Bhojpuri dub.