"Bharat bandh" over SC/ST law: Mobile internet has been snapped in Punjab till 11 pm today. Banks and schools will remain shut, and public vehicles will not run

"Bharat bandh": There is confusion over whether CBSE Class 10 and 12 exams are postponed in Punjab

New Delhi: As Class 10 and 12 board exams are held across India today, thousands of students in Punjab are in a fix because though schools are shut for a nationwide shutdown or Bharat bandh, it is not clear whether their exams have been cancelled.

Asked about the exams being put off in Punjab by the CBSE (Central Board of Secondary Education), a senior district official in Amritsar, Kamaldip Sangha, said he had no information.

"We have only been told to shut schools and colleges due to a bandh call against the dilution of SC/ST (Scheduled Castes and Scheduled Tribes) status, there is no change in the exam schedule," said Mr Sangha.

The shutdown has been called by Dalit groups against a recent Supreme Court ruling that they claim goes against the welfare of people bracketed under Scheduled Castes (SC) and Scheduled Tribes (ST) categories.

Last evening, the CBSE had said in a statement that the exams had been rescheduled due to security concerns.

"Taking cognisance of the letter of the director general (school education), the CBSE decided to postpone all class 12 and 10 examinations scheduled for April 2, 2018 in the state of Punjab," said the CBSE statement. 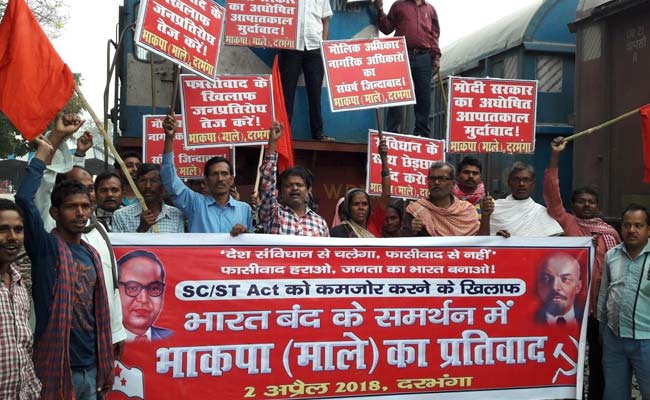 "Bharat bandh": Dalit groups claim the Supreme Court order on the SC/ST law has diluted it to such an extent that they would feel vulnerable now.

"Exams will carry on as per schedule in UT (Union Territory) of Chandigarh and rest of the country," the CBSE statement said. Chandigarh is the capital of both Punjab and Haryana.

The state government has snapped mobile internet across Punjab till 11 pm today to prevent rumours and fake information, which could spark violence, Punjab home secretary Rahul Tiwari said. Banks and schools will remain shut and public vehicles such as buses and taxis will not run.

Punjab, where according to some estimates has 32 per cent ST/SC people, is fast becoming the epicentre of a protest against what some Dalit groups call dilution of the law that is supposed to protect them.