Bharat Bandh Day 2: The strike has been called by the central trade unions against the alleged repressive policies for workers adopted by the government. 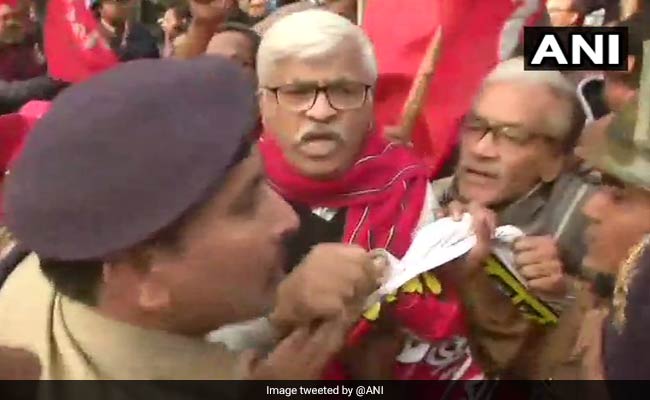 The two-day Bharat Bandh called by ten trade unions disrupted normal life in many parts of the country yesterday. The bandh enters its second day today. The Bengal government has directed bus drivers to wear helmets. CPM leader Sujan Chakraborty, other protesters were detained by the police for participating in the violence. Sporadic violence was reported in West Bengal, Odisha and Kerala yesterday. Tyres were burnt and buses were vandalised at many places in Bengal. Protesters blocked roads and obstructed train services in all the three states on day 1. Around 20 crore workers of the Central Trade Unions (CTU) are participating in the two-day nationwide strike today and tomorrow. Trade unions are protesting alleged anti-worker policies of the Central government.

The strike has been called by the central trade unions against the alleged repressive policies for workers adopted by the government.

Here are the Highlights of Bharat Bandh's Day 2:

However, more shops and establishments opened their shutters on Wednesday compared to Tuesday.

Barring the Bharatiya Janata Party (BJP)-backed BMS trade union, all other unions supported the strike where the protesters have raised several demands including a raise in minimum wages to Rs 18,000.

State-owned private buses and contract vehicles remained off the roads but pilgrims to the Sabarimala shrine were allowed to proceed from all places on a limited scale.

More private vehicles were seen plying across the state, but auto rickshaws remained few in numbers.

While banks were shut, attendances in state and central government offices marginally improved since Tuesday.

All university examinations slated for Wednesday have been postponed and educational institutions were closed.

Even though the tourism industry had sought exemption from shutdowns, popular tourist destination like Alappuzha and Wayanad were badly affected as travellers was unable to move from one place to another.

There were also reports of rail and road blockades from several parts of the state.

Jan 09, 2019 13:04 (IST)
Private buses stay off Goa roads due to trade strike
Daily commuters, office goers and students suffered as private bus operators stayed off roads across Goa on Wednesday on the second day of the 48-hour nationwide trade strike called against the Centre's "anti-worker" policies.

While no incidents of violence were reported, according to the district administration, absence of private buses which ply on majority of the public transport routes, left passengers in distress, despite the fact that additional buses from the state government-operated Kadamba Transport Corporation (KTC), were pressed into service.

"I could not reach work. There were virtually no private buses along the Anjuna-Mapusa route, on which state Corporation buses do not operate," Alok Naik, a daily commuter said.

Transport Minister Sudin Dhavalikar said that all efforts were being made to minimise the impact of the strike in Goa.

"We have pressed extra KTC buses into service. Police security has also been beefed up in and around bus stops, railway stations and other key places where there could be trouble," Mr Dhavalikar said.

John Nazareth, President of the Goa Government Employees Association, said that government servants reported to work, because the Association only "morally supported" the strike, but did not participate in the same.

A few trains, including the Howrah-Puri Satabdi Express, however, had to be cancelled, an official said.

The strike mostly affected vehicular movement at several places as the agitators resorted to road and rail blockades.

They obstructed train services in Bhubaneswar, Balasore, Berhampur, Cuttack and many other places in the state.

The agitators were seen picketing in Bhubaneswar. However, many vehicles were plying without any hassles in the capital city.

Schools, colleges and universities in several districts remained closed in view of the strike.

"Our strike has been successful on its second day. We are protesting the anti-labour policies of Narendra Modi government and the people are supporting our cause," said Sauribandhu Kar, state General Secretary of All India Trade Union Congress.

The trade unions are protesting for the fulfilment of a 12-point charter of demands including inflation control, minimum wages, social security schemes, stalling privatisation of government enterprises, discontinuation of foreign investments in railways, banks and insurance sectors and jobs for unemployed youths among others.
Jan 09, 2019 12:58 (IST)
Bharat Bandh affects Kerala
Angry protesters stormed into the cabin of a State Bank of India (SBI) manager in Thiruvananthapuram and vandalised it.

"At around 10.15 a.m., angry protesters came into my cabin and asked if I did not know that today is a protest day. I told them that although we are open, banking operations were not taking place. Then they threw the computer and other properties on my table," Santosh Karunakaran, the manager, told IANS.

The branch is located near Chief Minister Pinarayi Vijayan's office and also the temporary union office of the protesters.

The bank has lodged an official complaint and the police have launched a probe.
Jan 09, 2019 12:40 (IST)
Protesters threw banana leaves on the overhead wire disrupting train services on Dakshin Barasat, Mathurapur on Nischindapur-Kakdwip and Kakdwip-Namkhana lines. In order to restore services, tower vans have been pressed into service by the railway authorities to remove banana leaves from the overhead wire.
Jan 09, 2019 11:10 (IST)
Protesters during 48-hour Central Trade Unions strike vandalised a government bus in Dinhata, Cooch Behar; 2 people including bus driver injured, police present at the spot, reported news agency ANI. 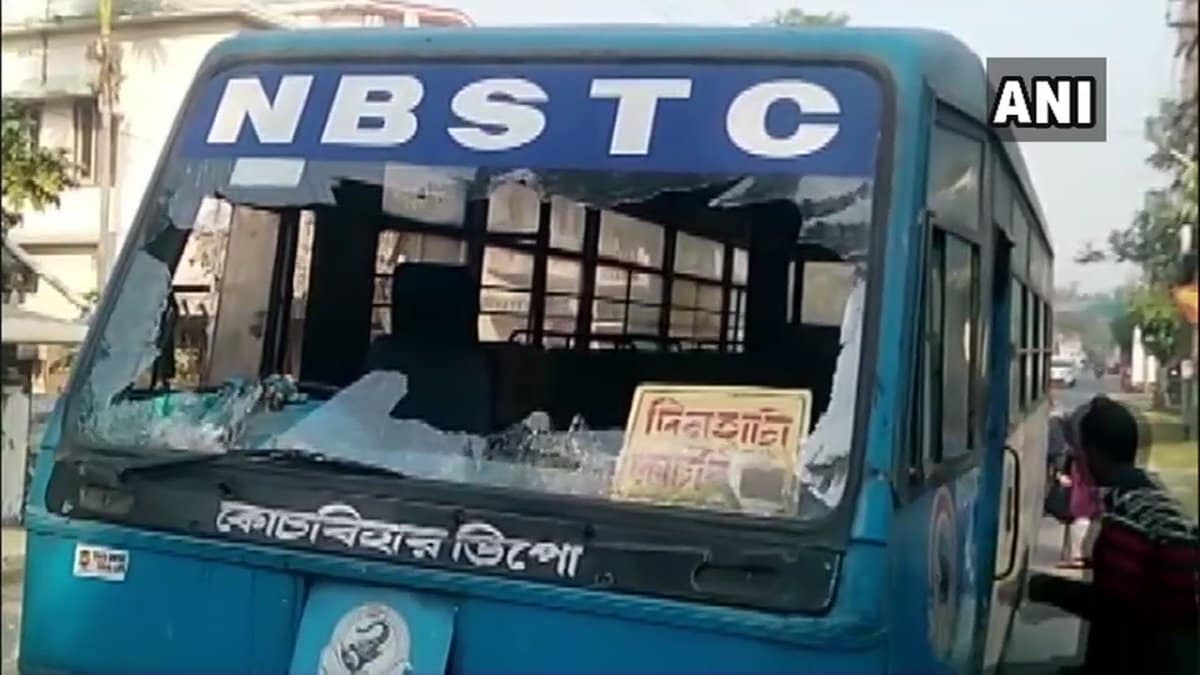 Jan 09, 2019 10:31 (IST)
Government offices, IT sector and port activities were normal, while banking sector experienced partial impact with some branches and ATMs closed. Workers in tea gardens also worked like normal days. However, PSU insurance companies were closed on Tuesday.
Jan 09, 2019 10:31 (IST)
In Coochbebar district, supporters of the strike pelted stones at autos as a result of which the drivers stopped the services.  Senior CPI(M) and Left leaders took out processions in various parts of the state in support of the strike. Elaborate security arrangements made by the Trinamool Congress government had foiled the striking unions'' bid to stall the normal life in the state.
Jan 09, 2019 10:24 (IST)
Train services have been hit in the bandh. 20 crore union workers have taken part in the strike.
Jan 09, 2019 10:08 (IST)
Two students were injured in Bengal's Howrah after protestors participating in the two-day nationwide strike threw stones at a bus at Shanpur Mor on Jhikira-Howrah route. The police later on reached the spot and dispersed the protesters, a police officer said. 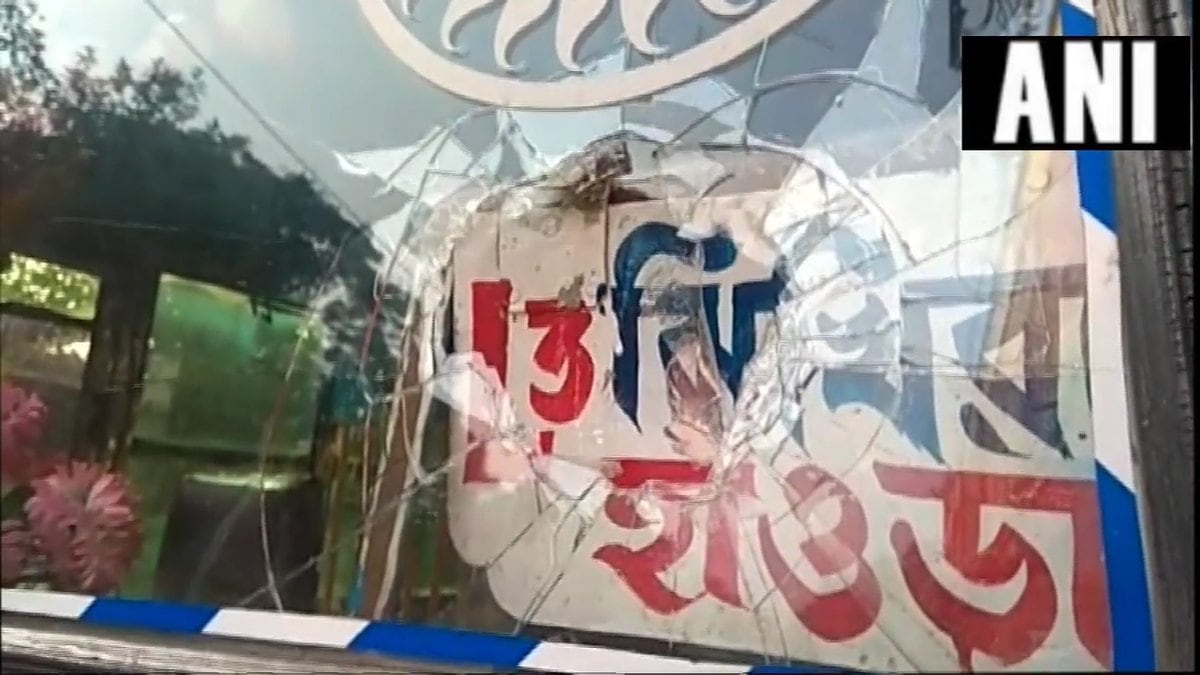 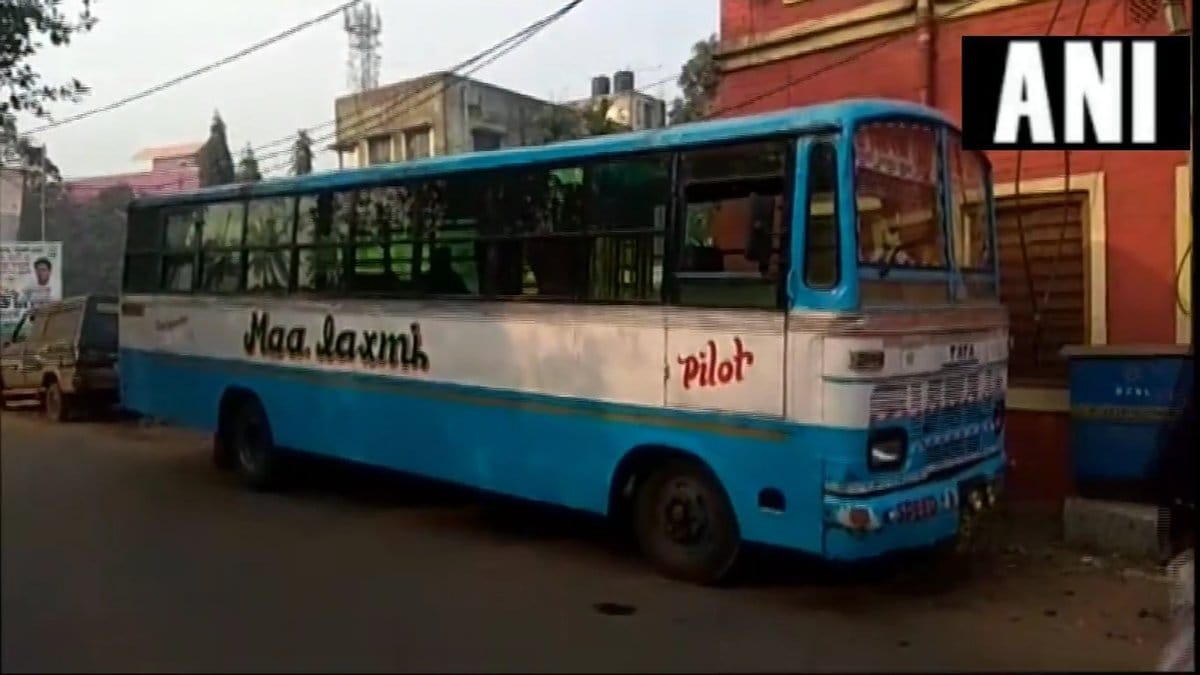 Jan 09, 2019 09:33 (IST)
Bharat Bandh Day 2 in West Bengal
CPM leader Sujan Chakraborty along with other protestors detained by police while they were participating in the two-day nationwide strike. Mr Chakraborty was also arrested on Tuesday for taking out a rally in support of the strike and was released in the evening. Visuals by ANI: 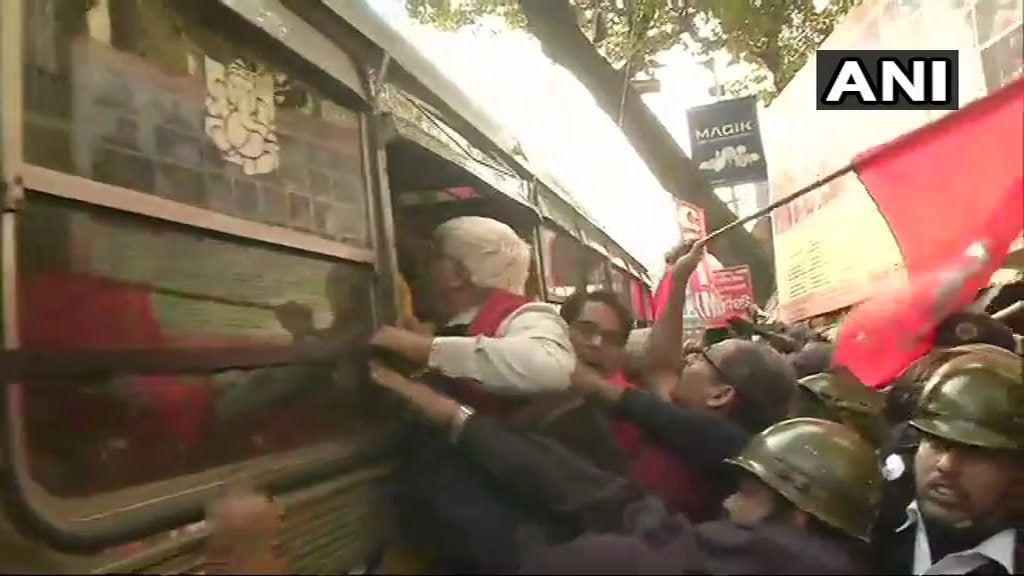 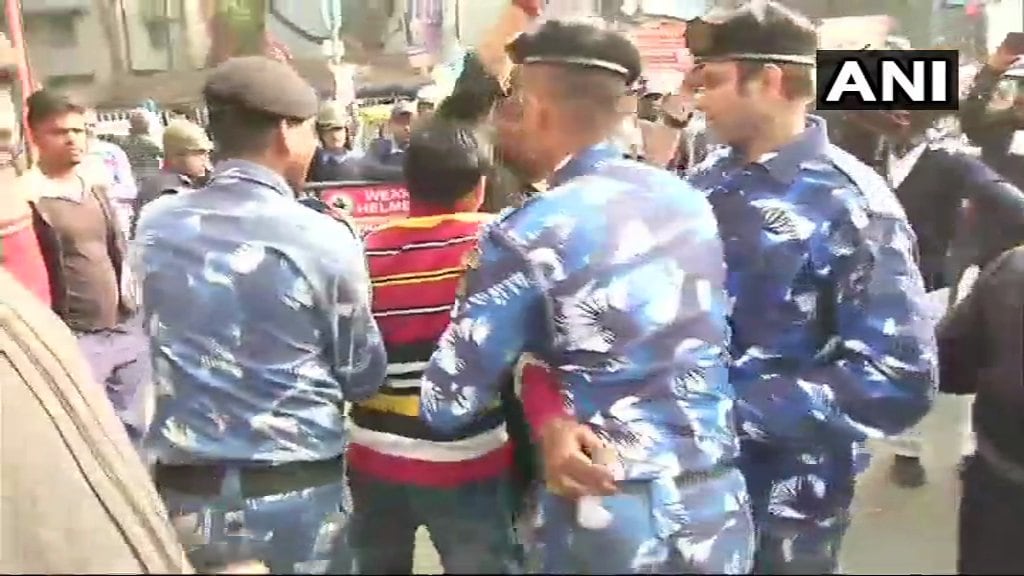 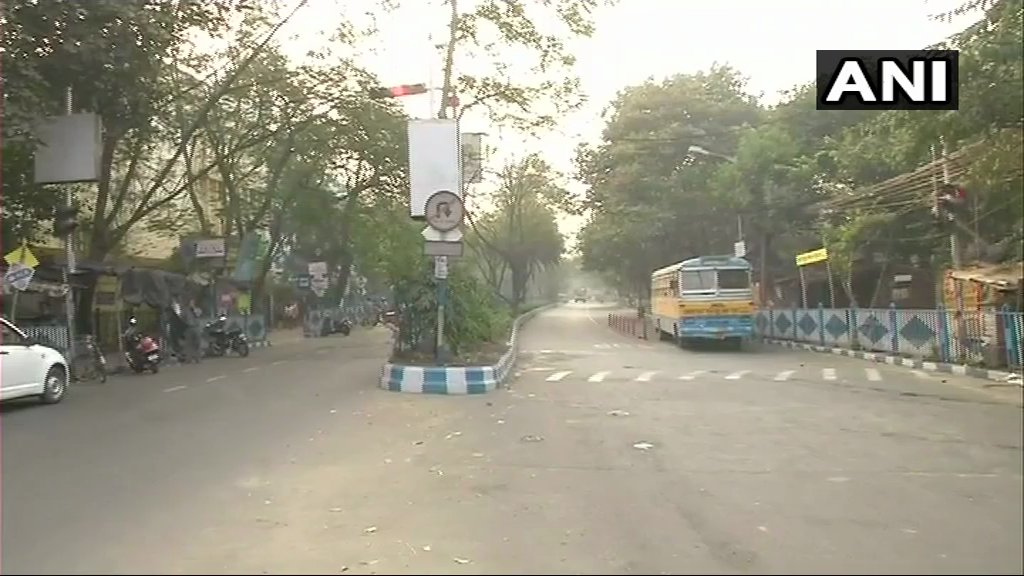 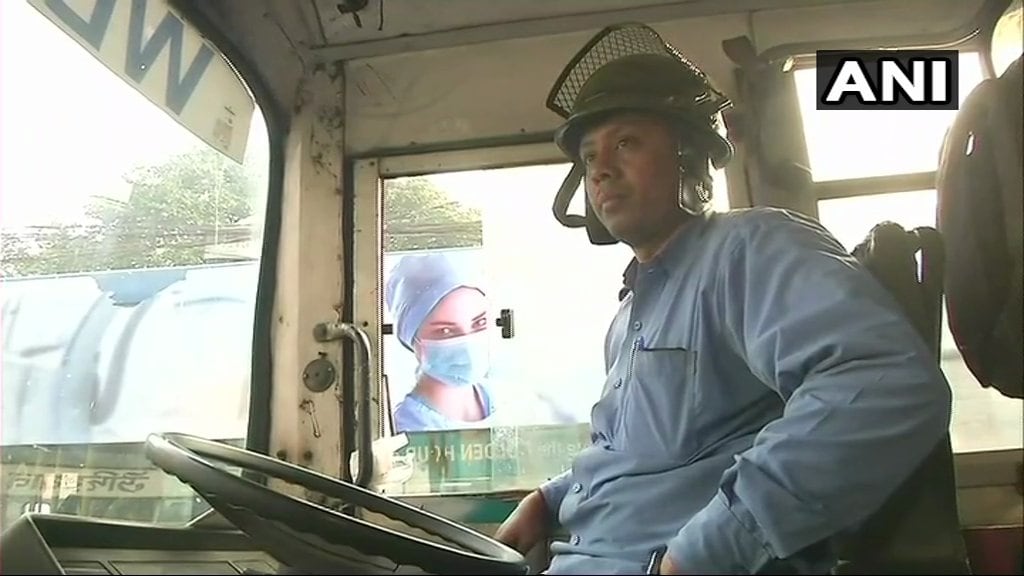 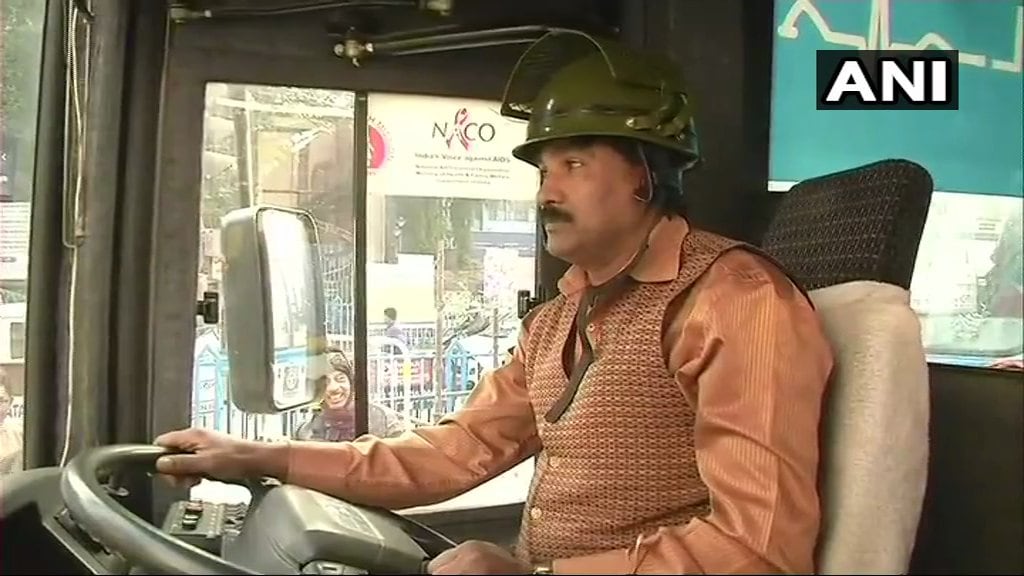 Jan 09, 2019 09:00 (IST)
Today, the protesters have planned to march from Mandi House to Parliament and similar marches will be held across the country, said trade union leaders. The unions alleged that suggestions on labour codes were given to the government but they were rejected.
Jan 09, 2019 08:59 (IST)
One of the major demands of the trade unions is enactment of the Social Security Act and setting minimum wages at Rs. 24,000 for the unorganised transport sector.
Jan 09, 2019 08:59 (IST)
In east Delhi, members of the All India Central Council of Trade Unions (AICCTU) were out on the streets, protesting privatization of government sector businesses. Protesters raised slogans demanding minimum wages and social security.
Jan 09, 2019 08:50 (IST)
In Odisha yesterday, trade union CTU members protested and blocked roads in Bhubaneswar. Protesters also blocked the National Highway 16 and burnt tyres. In Kerala, protesters sat on the railway tracks and raised slogans alleging the Central government's anti-people policies. Very few state buses were seen on the roads in state capital Thiruvananthapuram.
Jan 09, 2019 08:49 (IST)
In Mumbai yesterday, over 32,000 employees of Mumbai's civic transport went on an indefinite strike to demand higher wages. The protest, which coincided with the trade unions' strike, affected nearly 25 lakh daily commuters.
Jan 09, 2019 08:47 (IST)
Trade union leaders alleged that the government has "failed to create jobs and grossly ignored" the 12-point charter of demands, which includes minimum wages and social security schemes. Farmers' groups affiliated with the Left parties have threatened to call gramin hartal protesting the Centre's failure to address rural distress. Workers from sectors such as telecom, health, education, coal, steel, electricity, banking, insurance and transport are supporting the strike. Farmers and students' groups have also supported the strike.
Jan 09, 2019 08:46 (IST)
Trinamool Congress and CPM workers clashed in Kolkata, Asansol and Hooghly districts in West Bengal yesterday. The police had to lathi-charge to disrupt the mob in Asansol. A school bus was vandalised in Barasat, around 30 kilometres from Kolkata. There were two students in the bus but weren't hurt. Buses were vandalised in Asansol and Hooghly as well. Train services were disrupted in Jadavpur, Sodepur, Rishra and Uttarpara. Chief Minister Mamata Banerjee said her government is opposed to any bandh. "We have taken a stand of not supporting any bandh. Enough is enough. In the last 34 years, they (Left Front) have destroyed the state by calling bandh," Ms Banerjee said yesterday.
Jan 09, 2019 08:25 (IST)
In a joint statement, the CTUs alleged that the government undermined tripartism and continued its "aggressive attack with arrogance on the lives and livelihood of the working people." They also oppose the proposed amendments in the Trade Union Act, 1926, saying those are irrational and extremely damaging to the independent functioning of unions. The unions claim that farming communities through their associations have also extended support to the strike. Student and teacher organisations of various universities have also declared support, the statement said.
Jan 09, 2019 08:25 (IST)
The 10 CTUs going on strike include INTUC, AITUC, HMS, CITU and AIUTUC, among others. RSS affiliated Bharatiya Mazdoor Sangh or BMS will not participate.
Bharat BandhBharat Bandh Live updatesBharat Bandh Day 2