The 45-year-old Lingayat seer in Karnataka who died by suicide on Monday was “honeytrapped” and being blackmailed over “obscene video calls” with a woman, police today said. "Two names in the suicide note are connected to the mutt," investigators have told NDTV.

“The private moments of the woman (unidentified so far) and the seer were captured by the woman using her phone's screen-recording function,” the sources said.

“An unknown woman has done this to me,” reads a line in the suicide note, according to a senior officer who did not want to be named as further probe is still on.

The seer, Basavalinga Swami, was found hanging from his prayer room's window grille at Kanchugal Bande Mutt, which he headed, in Karnataka's Ramanagara district on Monday morning. His suicide note mentioned blackmail and harassment by "some people who wanted to remove him from his position", police had said yesterday.

“The woman and a few others threatened the seer that they would release four obscene videos,” a probe official said. “We have leads on who these people are.”

Asked if there could be big names involved -- given that sects and religion have a role in Karnataka's politics – a source in the police further told NDTV, “There might be politics within and outside the mutt. Some seers are well-connected with politicians, and they could pull strings to defame each other. But the suicide note has no mention of any politicians at all." 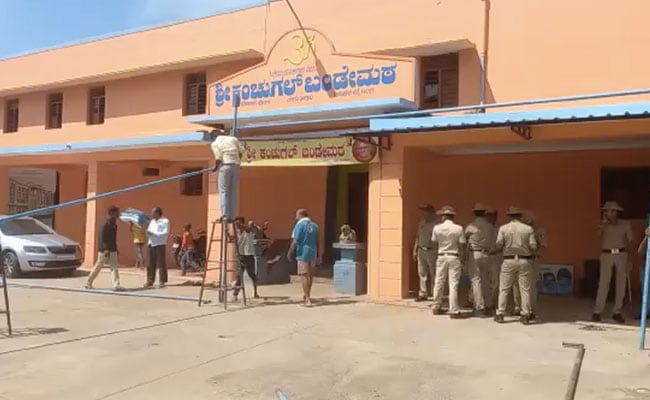 Police at the mutt in Kempapura village, Ramnagara district, Karnataka

The seer had taken over the 400-year-old mutt's chiefship at the age of 20 in 1997, and recently celebrated the silver jubilee. He was found hanging by the mutt's staff around 6 am on Monday.

In December, the head of Chilume Mutt, also named Basavalinga Swamy, was found hanging in a similar fashion. He reportedly had died upset over his deteriorating health.

Two weeks ago, a fresh case was registered against a Lingayat seer, Shivamurthy Sharanaru of Muruga Mutt in Chitradurga, who is currently in jail over rape allegations, after four minor girls alleged that they were sexually assaulted by him for years.

The Lingayat sect, which has a number of centres in Karnataka and some neighbouring states, forms a powerful 17 per cent of Karnataka's population, giving it heft across spheres, particularly in politics.

Chief Minister Basavaraj Bommai and his predecessor BS Yeddiyurappa come from the sect. While the sect has traditionally been with the BJP, in August, Congress leader Rahul Gandhi took ceremonial initiation into it at Muruga Mutt, hoping to broaden the party's appeal ahead of elections due in about six months.

The sect was founded in the 12th century by social reformer and poet Basaveshwara, who has a huge following in some neighbouring regions of Maharashtra, Telangana, Andhra Pradesh and Tamil Nadu too.