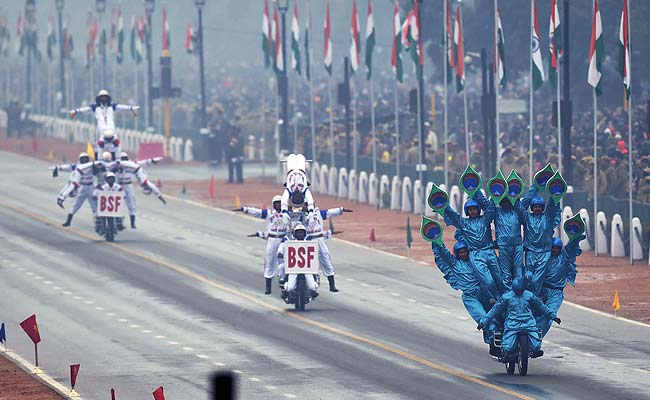 the motorbike riders of the Border Security Force (BSF) perform stunts on Rajpath during the Republic Day. (PIB / AFP)

New Delhi: US President Barack Obama, clearly impressed by the motorcycle stunt riders at India's the Republic Day parade on Monday, mentioned them today for the third time in 24 hours.

"The secret service doesn't let me ride motorcycles, especially not on my head," he quipped.

The stunt riders of the Border Security Force, called India's Daredevils, got a thumbs up from POTUS even during the two-hour parade on Monday. President Obama was the chief quest at the parade.

His wife Michelle Obama, too, applauded the bikers.

Later in the evening, while addressing CEOs, President Obama said he would "not drive" a motorbike after watching the daring performance by the BSF riders.

"I would, by the way, not drive a motorcycle after watching those incredible acrobats," he said, in open admiration for the 'Jaanbaaz' bike riders.

Promoted
Listen to the latest songs, only on JioSaavn.com
The bikers formed a human pyramid on moving bikes during their stunning display at the parade.

The Obamas left for Saudi Arabia this afternoon.