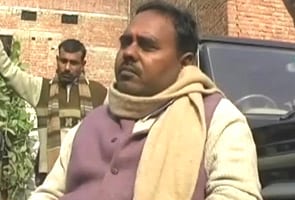 "The process for MLAs arrest is underway. He will certainly be arrested according to the preliminary report of the CB-CID," Uttar Pradesh Cabinet Secretary Shashank Shekhar said while addressing a press conference in Lucknow.

"This is a preliminary report and even if the involvement of the cops is found then they will be prosecuted," Shekhar added.

He, however, said that the case of the theft against the girl is correct.

A preliminary inquiry by the CB-CID into the Banda rape case has found that Dwivedi had raped the teenager and framed her in a false theft case.

The BSP had suspended Dwivedi from the party till the findings of the inquiry report were not received.

The preliminary inquiry also reportedly stated that the 17-year-old girl was not only raped by the MLA, but was also framed in a false theft case.

The girl, who appeared before civil judge junior division Ravi Kumar Gupta, had alleged in her statement that Dwivedi raped her twice while his aides teased her, prosecution sources said.

She also alleged that no action was taken against Dwivedi as police was conniving with the MLA and his aides. The girl had given a similar statement to a three-member team of National Commission of Women (NCW).
Comments
Banda teenBanda rapeBSP MLA rape